“Had she really never been hungry enough to eat a flower? Did she not know that you could day lilies, daisies, pansies, and marigolds. That hungry enough, a person could eat the bright faces of violas, even the stems of dandelions and the bitter hips of roses?” – Adam Johnson in The Orphan Master’s Son

If you’ve ever been befuddled by the countless iterations of the USDA’s most ubiquitous, didactic, somewhat condescending fancy triangle – the Food Pyramid – you might find the common Khmer prescription for a balanced diet a little easier to swallow. From a young age, Khmer kids are taught (theoretically) about the 3-Food Groups. Rice, noodles, potatoes, and some fatty foods like oil and coconut meat are Go Foods, full of energy in the form of carbohydrates or lipids. Grow Foods such as meat, eggs, and beans are protein-packed and help build strong bodies. Glow Foods protect us  from disease with their many vitamins and other plant-compounds found in vegetables and fruit. 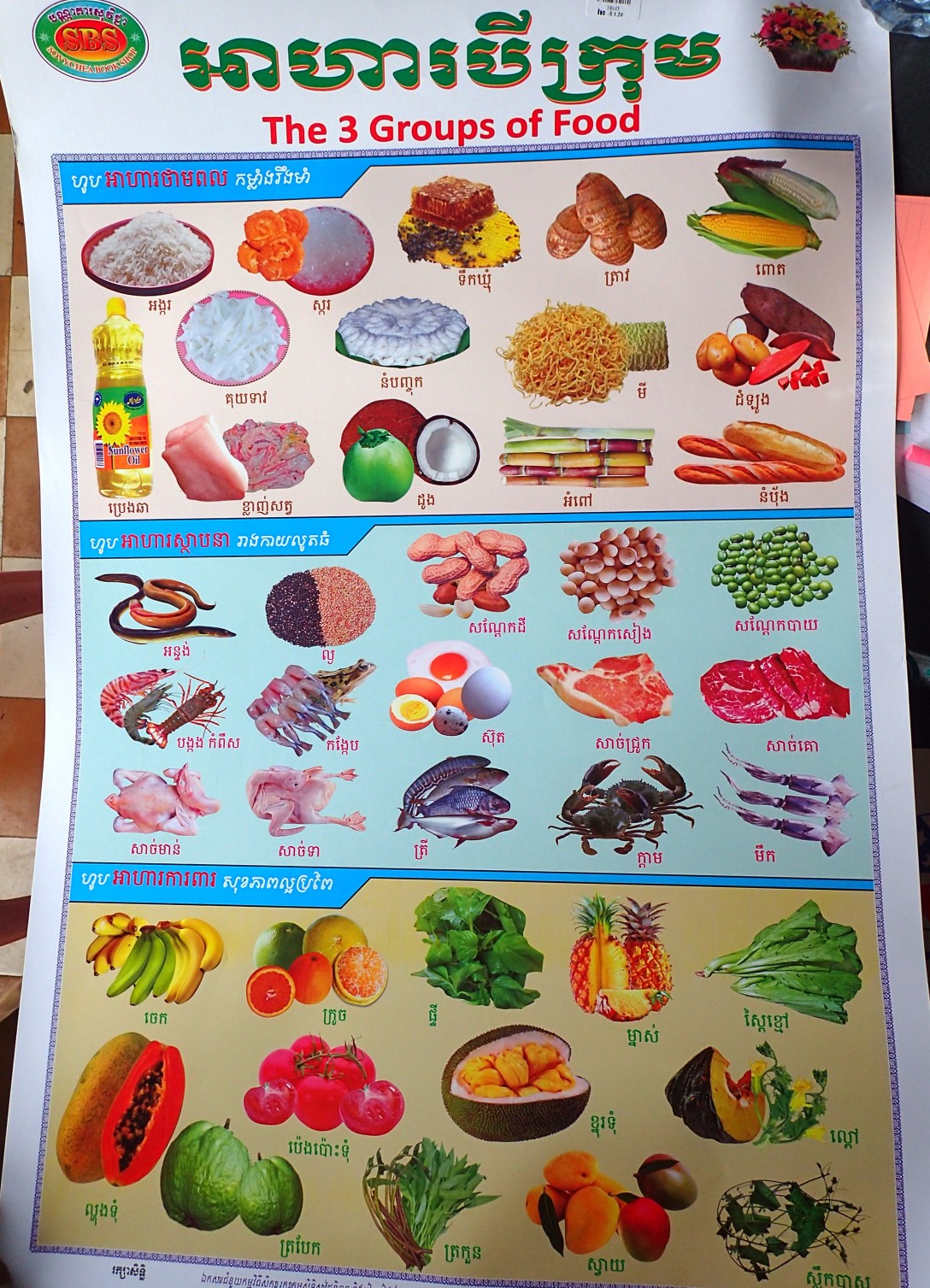 As you may have heard, rice is a rather big deal here. In some ways it transcends the realm of mere sustenance. Rice is all at once a lifestyle, livelihood, and life’s blood. The divine weight that rice carries precludes it from this post about the earthly, pedestrian Cambodian foods we eat on a day-to-day basis – the plants and proteins with which my family sparingly adorns their rice while I attempt with utter futility to round out my plate piled high with rice by my host-sister’s generous hand.

Many renowned Cambodian dishes and their keystone ingredients originated from scarcity and famine during the Khmer Rouge years. My brother Grant would call the Cambodian food scene a “use every part of the buffalo” situation. This is especially true in the countryside. Animals and insects that might be cast in the more ghoulish or sinister roles in children’s tales end up center stage at breakfast, lunch, and dinner. Generations of eyes trained to catch on every tender, glinting tissue of a plant ensure that the tastiest flowers aren’t wasted in frivolous wedding centerpieces but rather exalted in simple, succulent stir-fries. And above all, nothing which passes through the lips of a Cambodian is more prized than that which is chemical-free, grown in the village, and wholly natural.

The fact that certain countries (*cough* Vietnam) use pesticides and/or antibiotics to increase the size and yield of their crops is considered a tough pill to swallow at best and the most grandiose of schemes to undermine Cambodian welfare via a poisoned food supply at its worst. No food is more demonstrative of the Khmer affinity for natural and chemical-free produce than trakuuen, morning glory vines. I think of morning glory first thing in the morning when I awaken before the sun to the sound of mak chopping up yesterday’s wagon-full of vines for the pigs and chickens. I think of it, too, when I fall asleep with my belly full of the most tender green shoots lightly pounded and quickly sautéed in oyster sauce. It grows rampant in the murky, marshy waters lining the roads and running in canals along the rice fields and thus there is always enough of this leafy green for man and beast alike.

Beyond swamp grass, the second most pervasive source of fiber with some semblance of plant nutrients is unripened fruit and their flowers. Green mangoes and papaya, chalky bananas, and bitter “blue” oranges hang ever-present on their respective trees until someone deigns to dip them in sugary chili-salt, coat them in fish sauce dressing, or sprinkle them with MSG and salt to coax out both a tolerable flavor and texture. And by God, it works. Green mangoes yield into something between a snappy ripe apple and a carrot and lend themselves beautifully to sweet shallot-laden relishes to be paired with fish. Unripe papayas can be cut into chunks and boiled in stews and soups like potatoes or shredded into long ribbons for one of the few Khmer dishes resembling a salad – nyom lhong, a limey, salty, spicy green papaya salad with slivers of pork belly and fresh water shrimp, crushed peanuts, and bright herbs. During my (thankfully) singular most severe bout of illness since being here, mak showered me with prized oranges from Pursat and Takeo coconuts, both “blue”, from which I was permitted to savor the juice with a touch of MSG and salt to cure my ick.

Along the same vein of pulpy vehicles ready-made for flavor endowment comes flowers, especially that of the banana. When permitted to bloom to fruition or prematurely severed in two, the conical maroon spacecraft reveals fronds of nascent bananas outstretched like pale digits, as shown in the cover photo. These adopt the satisfying tooth of an artichoke heart when simmered in broth. The slivered blades of the hefty unopened bud are featured heavily along with diced lotus stems in traditional rice-noodle dishes. More ephemeral blooms such as the crisp purple crocus-like blossoms that shoot up from the marsh waters maintain their snap in my mak’s favorite indigo soup.

While judicious use of MSG here lends a pervasive round taste to most dishes, the sharp and earthy notes can be provided from any number of spices and herbs. Sharp and sizzling or deep earthy notes to counterbalance the pervasive round flavor characteristic of MSG. Recognizable are the sizzling ginger and turmeric roots, hot chilis and garlic bulbs, and sour, jammy tamarind but nameless are the dozen and a half herbs of which only the aunties know the unique growing sites.

Just when you reach the brink of being scathed raw beyond repair by the acrid flesh of one too many green fruits of any variety, a shift in the season brings a specific harvest flooding in from all avenues. Limbs already heavy with fruit bend deeper as everyone – mostly children wielding unruly gaffing sticks – are bewitched into branches by a spell of ripeness for a harvest frenzy. Tropical fruits of most varieties are available in the larger markets here but the most revered varieties are those grown naturally in Cambodian backyards: include bananas (miniature, aromatic renditions of American fruits), mangoes, papayas, tamarind, citrus, jackfruit, durian, milk fruit, guava, custard apples, and countless tiny, wild varieties – such as water tamarind – which continue to puzzle me as their fleeting seasons erupt and subside.

The severe scarcity of protein-rich foods during times of famine has demanded a trademark combination of culinary cleverness and reckless abandon in Khmer kitchens over the years. In my village which borders a swath of lowland which fills with fresh water during the rainy season, we are usually awash in freshwater critters such as small clams, crabs, shrimp, frogs, snake, eels, and countless varieties of small fish. These tasty beasts sleuth their way into the rice field canals and are caught unsuspecting in the fine nets set by local fishermen and women – of which there seems to be one per family.

The clams (leeh) are delicious both when dried in the sun or stewed with green onion shoots. Either way they are inseparable from Knorr, a brand of Ramen-like seasoning available nearly everywhere here.

Now that it is no longer forbidden by a totalitarian ruling force, many families raise some type of livestock, making use of whatever amount of land they have available. My family keeps a brood of chickens and sty of pigs in our practically non-existent backyard. However, while chickens are raised for their (meager) meat yield, more commonly seen are hoards of ducks waddling to and from temporary pens at the behest of their proprietor. Chicken eggs are rare and diluted by the deluge of duck eggs here, but given that the duck-variety (of both meat and egg) are higher in fat and therefore abundantly more delicious, chicken eggs are not missed.

Although pork is the most popular meat, the loopy, lovely Brahmin cattle are without a doubt the most visible livestock. Families pen the gentle brutes up at home and lead them frequently to the rice fields to graze. As of yet there exists no semblance of a dairy industry – at least in the Takeo countryside – but locally raised, grass-fed, excruciatingly tough Khmer beef is still prized in comparison to the tender, antibiotic-laden foreign alternative. The act of butchering livestock is complicated by Buddhist beliefs which forbid the killing of another creature, thus the slaughtering is often done somewhere far-removed from the place of purchase and by a mysterious someone who hopes his merit and the goodwill of others will eventually counterbalance the trespasses of his trade. The source of the expensive albeit festering meats sold in the village is further obscured by the meat-merchants roving about on their motos, beef flanks and pig ears in tow. Such is also the method by which the chewy delight of frondy intestinal meat has turned up in my morning noodles, sold without warning as the equivalent to “proper” red beef.

Even though the humid climate makes preservation of protein-rich foods a food-safety challenge, many drying and curing techniques are practiced. Quadripedal meat, frog, and fish flesh alike can be coated in salty sugar and left to cure. Drying is made easier by flattening the cuts by hand and tossing them in the sun. Mung beans are can be dried and stored or allowed to sprout in the sun for their shoots.

But without a doubt, the most signature Khmer preservation method – and perhaps Khmer food – is prahok, a pungent paste made of crushed and fermented fish. The preparation of the tiny filets is laborious and ongoing in every household as the metabolism of every family’s prahok reserve must be stoked. The paste is often served paired with fresh cut vegetables and takes many forms: whipped with duck egg and minced pork to create a savory soufle-like dish, made thick with palm sugar and fresh basil as a fruit and vegetable dip, and it sneaks its way into most soups for extra “oomph!” It is an acquired taste, to be certain.

Grampa, now that you’ve had a preview you can now properly begin to construct your arguments in defense of tasting any and all faces of Cambodian cuisine described herein. Should you find yourself in a stand-off with an offender too bizarre to bear, I’ll be sure you’re armed with the polite declination: aht jeh nyam – “I don’t know how to eat it!” I feel confident, though, that well find more than enough treats for you to savor. You might be encouraged by the fact that most Khmer fruits sport the offensive fuzz of a peach for which I know you harbor a long-smoldering opposition.

P.S. Flashback to this post (and this one, too) for more shots of the the wild market and kitchen scene here! Including the seafood market of Kampot Province and the makings of sour curried soup with my Kandal Province sister.