*This is a several part series about one of two large community projects my coworkers and I are managing. Hopefully these posts will shed some light on the mysterious whispers and mentions of “garden… workshops… soul-crushing stress” which my friends and family may have unsuccessfully tried to decipher over the previous months. I also hope this helps lend some credence to the Peace Corps model of development and why it really does pay to send volunteers to their communities for two long years of work. Why did I wait so long to pen down this project info, you may ask? Because I was frankly unconvinced any of it would WORK until I saw it with my own two eyes. My fingers remain crossed and I knock on most wood that I encounter, but luckily this community’s motivation is stellar. And in Vuth I trust.

Precisely a year and two weeks ago, my vaccinator and future counterpart-uncle-best buddy-mentor Vuth joined me in Phnom Penh for the Supervisor & Counterpart Conference. Our health center chief was also there because of the obligatory “supervisor” portion of the event title and the crushing Cambodian emphasis on status in the workplace. They were both cool, though. Peace Corps Cambodia hosts this event as part of our In-Service Training which occurs after we’ve been in our permanent sites for about three months pretending to integrate but actually desperately devouring novels and fried bananas in our rooms. This conference gives us a chance to sit down with our potential counterparts and work-partners as well as a translator (Peace Corps staff) and 1) clarify any lingering questions about our intended roles in the community, i.e. that we are not banks and 2) hammer out a rough schedule of different project ideas and goals for work. It was at this conference that Vuth, who had already nebulously mentioned his affinity for gardening in more way than one, finally worked up the courage to have me definitely pen “community garden” into our project ideas.

The two months which followed were a juggle of trying both to stoke Vuth’s enthusiasm and avoid committing to things about which I did not yet really know: grant-writing, organic garden construction, managing funds, etc. Vuth knew he wanted the garden to benefit mothers with small children somehow, but we didn’t yet have a clear idea how to get from our raw excitement to a well-defined project with goals and parameters. Additionally, the mere mention of the terms “grant” and “budget” around our coworkers jettisoned them into weeks of unabashed requests for some for the money and supplies for their own flower gardens or to let them sell the garden produce at home. Luckily Vuth is more skilled than anyone I know in the art of telling people to “clam-up and have some dignity, you shameless CHILDREN” and his gusto carried us clear into April. What Peace Corps calls “Food Security Training,” we volunteers call “Farm Camp” and it’s a hoot and a holler. The trainings are held several times over a few months and all the volunteers from different clusters of provinces invite a local counterpart and gather together for four glorious days of dirt and baby plants and machetes. As you can glean from the photos, Vuth abhorred the classroom portion but out of doors, he could not have been more in his element. I could tell he was learning by his silence and refrain from constantly correcting us toward some better method he’d devised on his own.

We learned about organic fertilizer, pesticide, and compost production using locally sourced materials as well as transplanting and direct seed-sowing. I had several friends and family back home ask, “Why would Cambodians need garden training? Aren’t they mostly farmers anyhow?” Indeed. Rice farmers, and very good ones. As you may have heard, though, rice has next to no nutrition aside from pure glucose. Additionally, the famine years made meat rare and highly prized as an essential food group which should be eaten whenever available. Nowadays, though, meat is ubiquitous and most people in my community eat it at least once per day, despite it not being the cheapest thing around. Additionally, Cambodian skepticism about imported produce being contaminated with harmful chemicals makes them wary of buying fruit and veggies they haven’t seen on the vine for themselves, preferably at the home of a friend or relative they trust. Khmer-grown, organic produce in the markets is pricey and out of reach for most families unless the market is glutted with a surfeit of something that season. Thus, most families eat plenty of Energy Foods (carb-rich rice, rice, rice) and Building Foods (protein rich meat, fish, and eggs), but Protection Foods like fruit and veggies are lacking.

Helping families start and maintain their own organic home-gardens in which they could grow they own produce year-round through organic methods would improve their skillset, their nutrition, and likely their household savings. Our community in particular had so many of the prerequisites: a motivated leader with strong local connections (Vuth), major aversion to imported produce (given that most of it comes from right over the border in DUN, DUN, dunnnn… Vietnam), a reliable water-source year-round (the floodlands and canals), as well as many extant skilled home-gardeners (although they currently only grew one or two varieties of vegetable for a few months of the year). We collected these data points together toward the end of training and melded them into a feasible plan which we could take back to our sites and run by the community and stakeholders. Here is what Vuth cooked up. 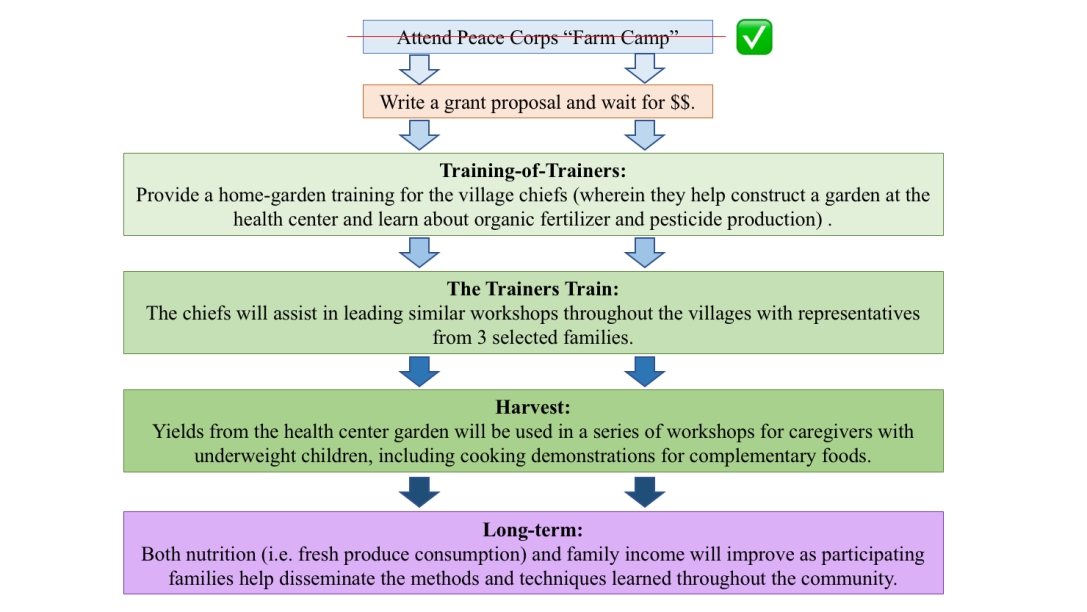 This launched us into another four months of hammering out the details as we wrote a grant. Vuth and I chatted with the ten village chiefs as we made rounds to their homes for vaccine outreach and asked them to begin thinking of families who they would want to invite. I had braced myself for resistance from at least a handful of them but was elated to find that all ten of the chiefs were over-the-moon excited about the project prospect. Even Vuth surprised me one morning by shouting my name from around the corner and then appearing with a tiny plant. “French corn!” (okra) he explained. He had gone and built a seedling nursery out of bamboo over the weekend.

In an effort to include our benevolent overlord and Great Leader, the health center chief, I periodically stopped into his office to update him on our congealing ideas and ask for his input. “Whatever you and Vuth come up with, I support it. Just take care of it on your own, you know that I am busy,” he would say as he ushered me back out. Two days before I would submit our application, I ran the final draft by our chief. He stopped me mid-sentence to break it to me that without a hefty per diem, there was no chance any one of these men would even think of participating in our training. All of my training in Cambodian deference and politeness nearly folded me over into defeat right then, but I pushed back. We had already spoken to every single one of these men over a course of many months and they know there will be only a small per diem for travel, I said, and they are still eager to participate and learn… sir. The chief stayed firm. “I would hate for you to be disappointed on the day of your training, Kelsey. Cambodians are lazy. They will not come without money. I cannot give this project permission until you write in a greater per diem for them. Ten dollars per day of training per person.” This quickly became my first altercation with not only a Cambodian but a superior at work. They have already agreed and you do not give them enough credit, I said, and giving them a per diem that big would amount to over a quarter of the entire project budget. Inexcusable. The community needed to provide at least 25% of the total project budget either cash or in-kind contributions. Paying the chiefs’ hourly (for labor which they had already happily agreed to do for free), made it pointless to call their spent in trainings and leading workshops “community contribution.” Luckily Vuth walked in at the height of my rage. He told the chief literally exactly everything I had but with the incontrovertible advantage of a male anatomy. The chief compromised and asked for only a tiny increase in their per diem as well as verbal confirmation of acceptance from each of the ten chiefs before we submitted our proposal. I reminded him that the deadline was in two days. “Call them,” he said, and closed me out of his office. Vuth gave me a defeated look. “You will have to talk to them, Kelsey. They are my friends and it is for that reason that they will try to manipulate and bully me into more money once they understand that we can increase their per diem, even if only by a little. They like and respect you. You have to talk to them.” And he really was sorry. As he left to go home, I internally crumbled upon thinking of calling each of the chiefs and attempting to talk about nitty-gritty project details over the phone. Even with a year of Khmer under my belt, Cambodian phone reception and lack of facial expressions to read destroyed all possibility of meaningful exchange. So I got on my bike.

Indignant and replete with carbs from the muffins I had stress-eaten, I biked to 8 out of 10 of our village chiefs’ homes over the course of a few hours and paid them each a quick visit. Despite catching one of them as he was taking a mostly-nekkid nap, I was warmly received. Strokes of luck included 1) that they were all home, 2) that they were so eager to participate that they were shocked we were even offering them a per diem (SEE), and 3) that the rain came pouring down no sooner than when I’d parked my bike at home. I managed to call the remaining two chiefs who understood enough to throw their hats in the ring.

The next day I glided to the health center and reported the success of my visits to Vuth. He grinned and nodded. The chief listened to me without making eye-contact as he munched on a pear imported from God knows where. “Right, good good,” he said, “Really it was no big deal, it was more to protect your feelings, Kelsey.” Please. That was July of 2017. The grant proposal was in the system for review and the community was stoked. All the proverbial hay was in the barn. I edited the grant only once, then we waited for the money to make its way through the pipeline. And we waited.

A month later than expected and right as I finished packing my bags for a surprise visit back to the States, the money arrived. Go time. Up next, Vuth spends like a prudent king and we negotiate with the forces of nature to set a training date.