Last week I stole out of the house at 4 AM under cover of darkness and went for a most harrowing stroll. In the dead silence of the sleeping village I thought the deafening screech of our vast metal gate would break the sky in two. With every painstaking step another mangey cur was roused from his post to slink toward me, pace, and pierce the night with shrieks. After maybe four or five years (3 minutes) of walking, I knocked on my aunt’s door. It was cake-making hour.

Num ansom chrook (“pork ansom cake”) is a traditional Khmer concoction prepared with sticky-rice and coconut, creamy peeled mung beans, and strips of pork belly all wrapped tightly in banana leaves for boiling. For holidays and special occasions, families will dedicate entire days to preparation of this duteous treat. Num ansom are an especially prized offering for the monks as these tightly-wrapped, long-boiled columns of mouthfeel will keep for days without spoiling. After months of bothering every individual in the village, young and old, for an opportunity to step in the sticky ring, I was not about to decline my aunts’ invitation to cake-make with them for Chinese New Year – even as certain death nipped at my heels.

After some admonishment for walking alone – my uncle was supposed to escort me but never woke up, for the record – the aunties settled back into their purposeful rustling. First, four sections of banana leaves are stacked and laid flat. A layer of rinsed yet uncooked coconuty sticky rice is spread on, followed by mung beans which have been peeled and steamed, and then comes a luscious strip of pork belly lightly seasoned with green onions, salt, and pepper. The leaves are lifted in both hands and skillfully wrapped into a tube as if the craftswoman has performed this very action no less than 999 times before. 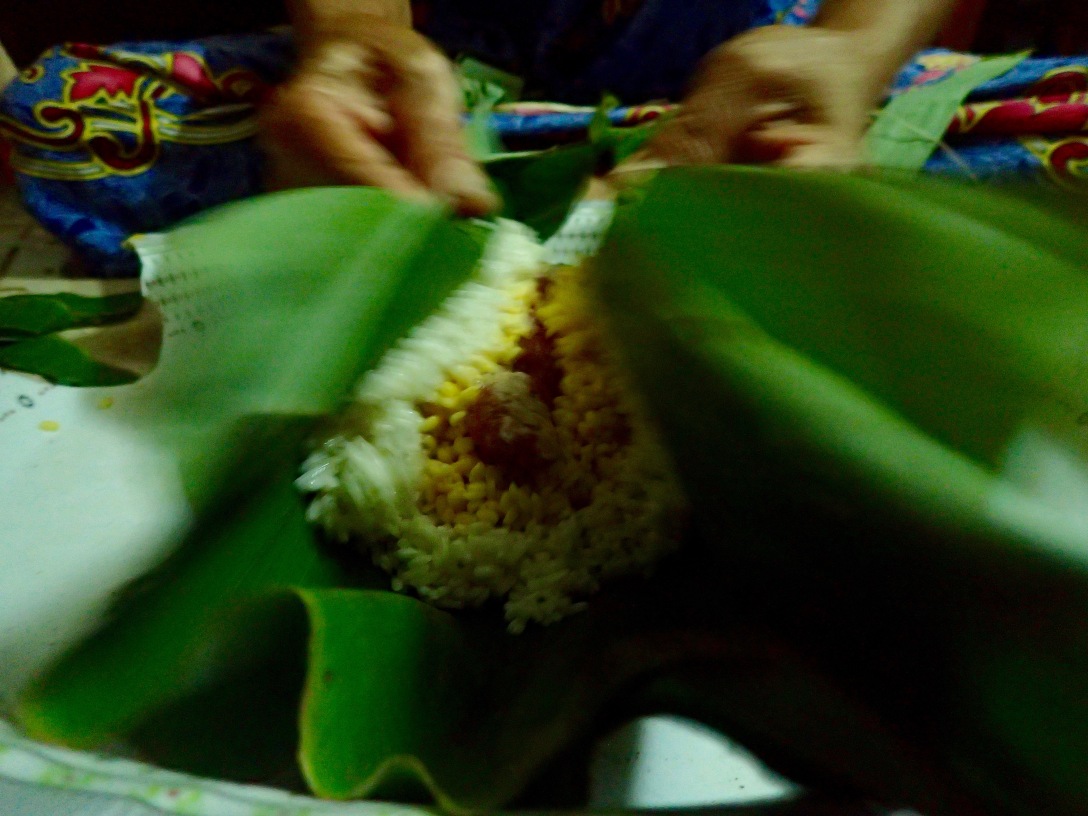 Some lay on another layer of rice before “the fold” but each maker knows their own proportions. Most, if any, conversation during this enterprise revolved around why one aunty’s rice to bean ratio was “insane” or harassing whoever was bogarting the “good scissors.” 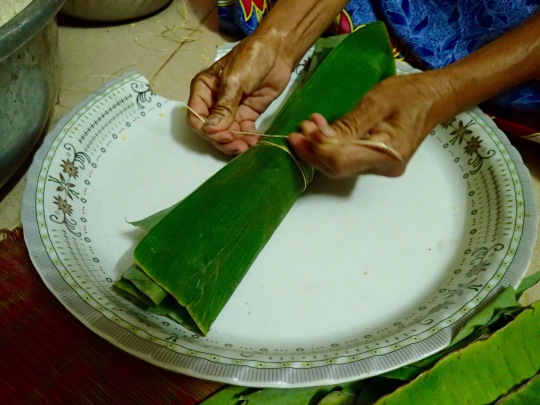 After the wrapping, trimming, and folding of each cake-end to create four orderly corners, a complicated tying and knotting ordeal began. This low-risk, high-reward stage became my purposeful outlet for those couple of hours in the dark. We giggled, sweat, and kept babyhands out of raw pork as the fortress of stately cakes amassed. 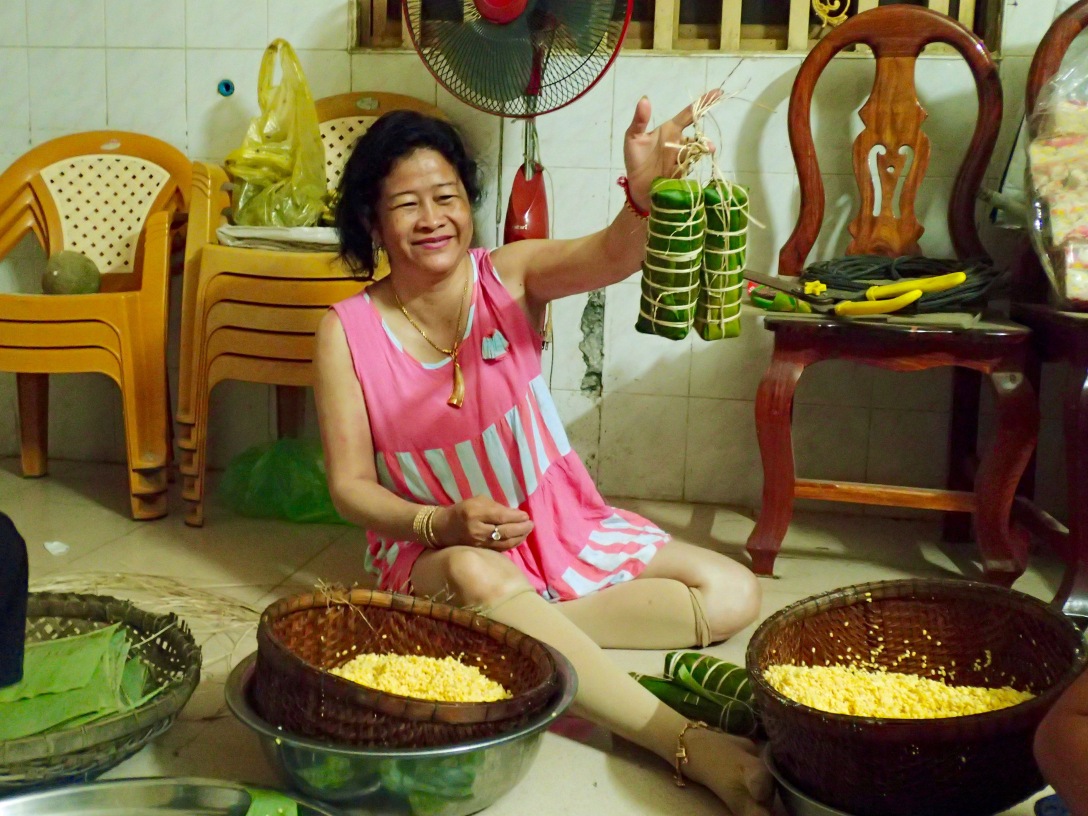 The beauty of housing various enticing fillings in a starchy vehicle – sushi and burritos come to mind – is that the possibilities are endless. A sweet variation, num ansom jake (jake meaning “banana”) was the solution for our remaining rice. The beans and pork were replaced with bananas lightly massaged and briefly coated in salt. Yaaeey, grandma, was sure to point out that this cake boasted three sharp corners at its ends as opposed to the former four. Important. The small, fragrant variety of bananas were a fruity far cry from the bland mammoths sold in America, and what is more, hours of boiling would make them turn violet and jammy in their gummy rice slippers. 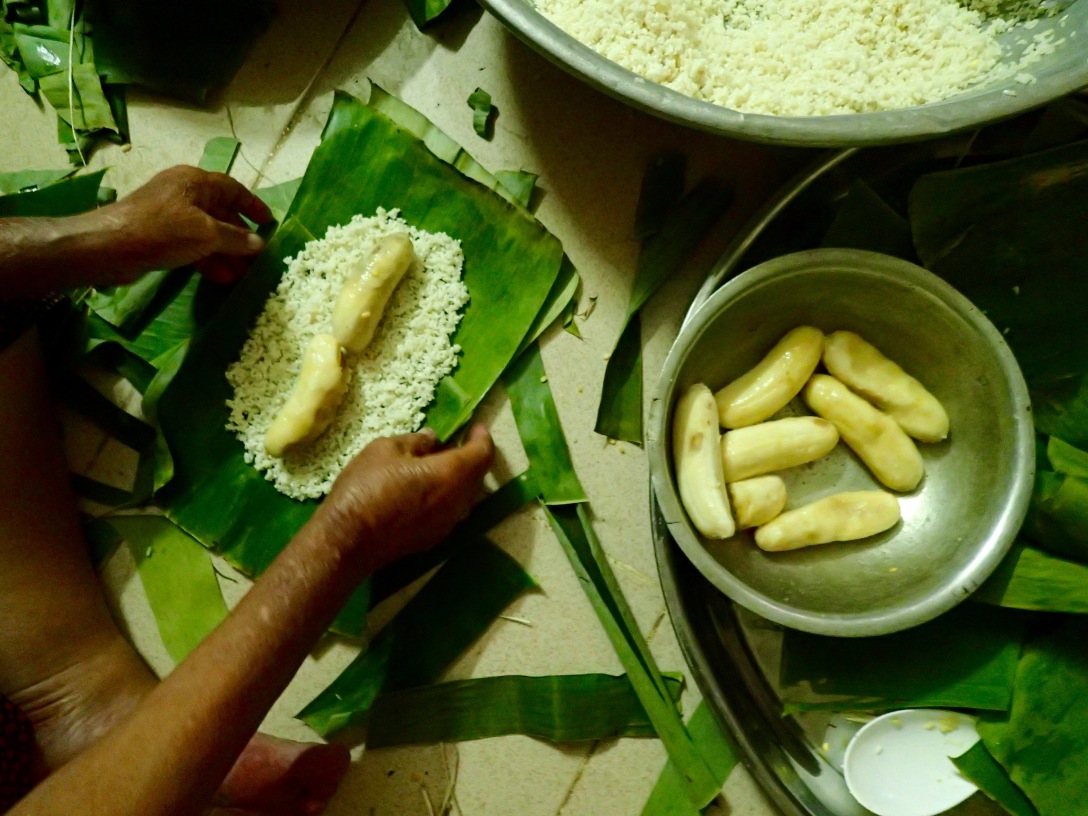 All the while we had been rapt in assembly on the cool floor, a vast cauldron had been rising to a boil in the back yard. The cakes would be submerged and boiled for the entire day. We scraped ourselves and the premises clean of rice and scattered to our various responsibilities. I serenely bid the morning moon adieu on my comparatively serene walk to work.

The early evening bike ride from my high school classroom to the aunties’ home was a brisk one. Upon arrival, my youngest aunt and older brother were fishing out a cake to test for doneness. Despite their nine hours in the stew, her masterful eye deemed them not yet edible. She, yaeey, and I passed a little more time by scorching pigs feet for ancestral offerings and inspecting other types of traditional cakes they whipped up that afternoon. The pyramidal num koem can be made sweet with coconut, palm sugar, and peanuts or savory with ground mung beans and pork. I verified this information with my mouth.

When my aunty’s num senses tingled at just the right wavelength, we fished the blistering bales from the stew and dunked them into cooler rain water. Hands were scalded and eyes leaked from smoke, but excitement from sensing the steaming baskets slowly fill was palpable motivation.

No sooner had we plucked out the final parcel than yaeey’s enduring hands tore into a plump cake for us to sample. In the quiet contentment filled gently by pleased cake-savoring sentiments, I turned over in my mind the fourteen hours of handiwork and centuries of tradition that had led to each velvety mouthful. The last thing I heard before departing for home in the moonlight was yaaey’s firm convictions about our sample cake. Too much bean, not enough rice. Must have been one of my aunt’s. 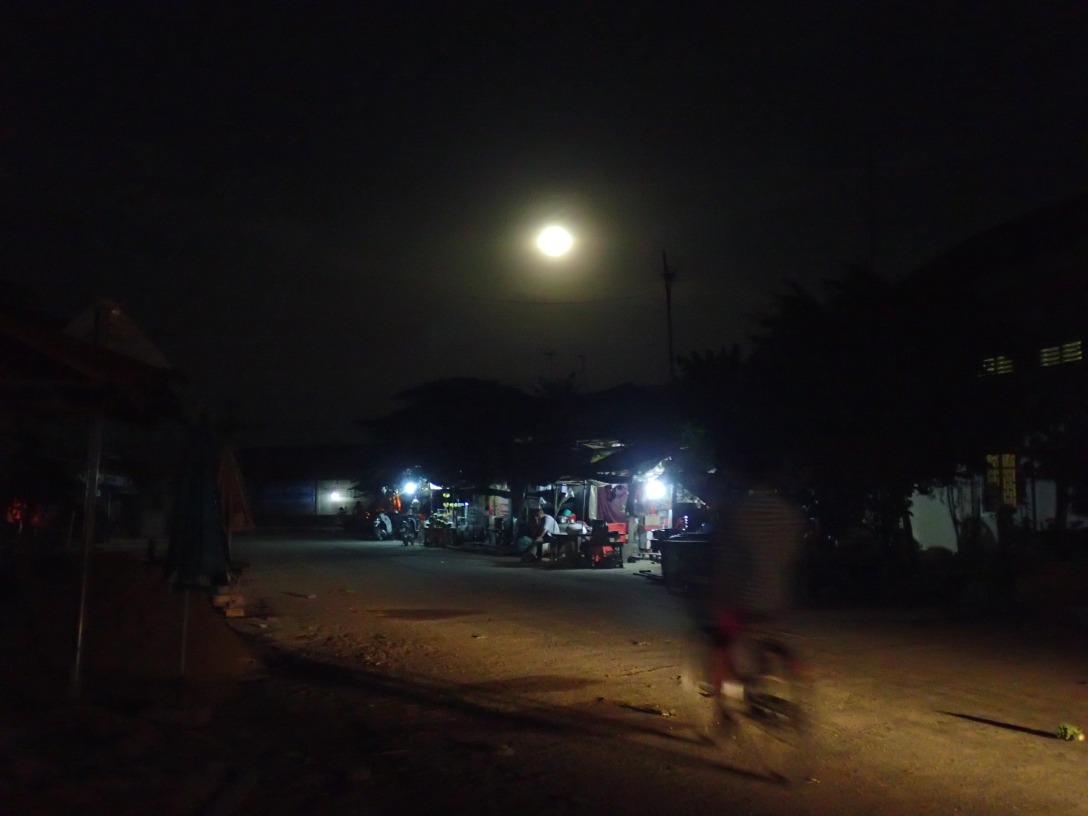 Grampa, this cake is practically made for you! It combines all of the celebrated fussing of cake-making with the chastising ceremony of a cook-out. I would absolutely mail you a hefty package of a few nums to savor if I believed they would escape the devious customs office uneaten. Hopefully this demonstrative video will tide you over.