We seem to take a lot of selfies in the morning at the health center and I’m not mad about it. One of the midwives (name: Na Vy? Maybe?) often asks me to help her translate small things into English for the various guys with whom she’s flirting online. One of them is in Baghdad, another in Nepal. The conversations are entirely superficial but interminable and bring her endless joy. The rest of the staff have been highly curious about my husband, Jacob, AKA the male who biked by the health center with me yesterday. Their belief that I’m hitched and have a protective husband watching over me from Takeo Town makes them happier than the reality (he’s another volunteer, a friend) so I have stopped correcting them.

I played a lot of germ-awareness games with some kids at the health center before I took a walk to So Sieb’s house to pick and eat my 63rd ripe red guava of the day. From there, all perfumed from the guava, I popped into 4 or 5 houses, said hi-bye! and walked to Chay Sinsimuntha’s house. Since we met by chance last week she has never done anything but spoil me with free coffee and gentle conversation. We chatted at her tiny shop as I helped package up some freshly toasted peanuts and she painted my nails. 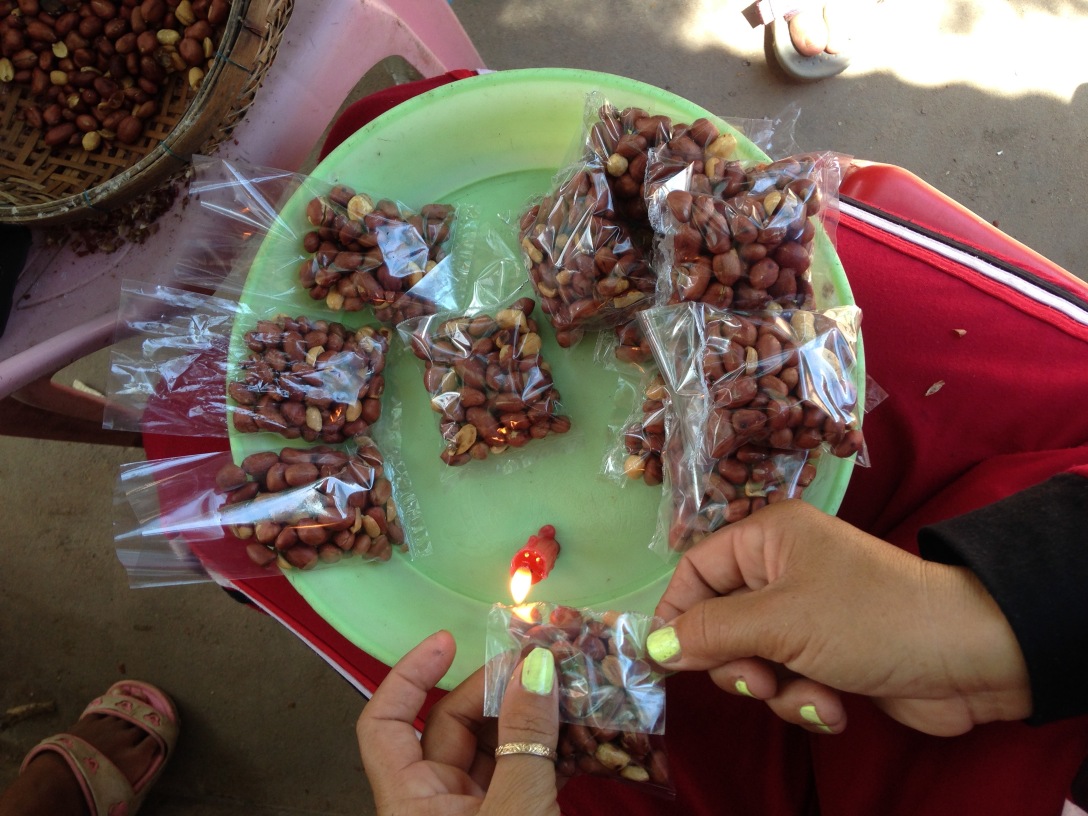 At home I tried to nap but couldn’t, too antsy. I began to make some flashcards when one of the health center staff, the vaccinator, (who gave me my initial tour of the health center on my first full day in the village, name: Vuth? …maybe?) came over to “sit-play”, or hang out. He lives right across the street and just wanted to see how I was doing. He’s very sweet. The neighbor girl, about 9 years old (Srey Heng, I know this one) wanted to play so we went next door and bought $0.25-worth of rubber bands which equates to one and a half million rubberbands. We tied them together, chain-style, until we had a 15-foot chain, then we hopped over it in turns like a jump-rope.

As the afternoon approached, I grew anxious. Hanging over my head was the promise I had made to one of the local monks that I would teach him and his friend English in the afternoons. The monks made me terribly nervous, all cloaked in their stunning orange robes and embodying all the wholesome holiness at which I have never been adept. I also reasoned that the entire arrangement might actually be wholly inappropriate: me, a woman, lustful by virtue of existing, alone in a classroom with the holiest, celibate men in our community? Images of public burnings flashed before my eyes. I called and cancelled the lesson in broken Khmer, felt the relief wash over me, then went to see what the commotion was about on the landing. Pa was bashing a giant hole in the cement of our balcony. For what I had no idea but his reassuring grin made me feel its final result would improve our collective quality of life immensely.

When Pa tired and went to lounge on the bench downstairs, I pounced. Painfully, I tried to explain the monk-situation, that I knew they wanted to learn English and that I could teach them but that I felt I needed to ask permission from the village chief, the head monks, Buddha himself, etc etc. Pa laughed. “No one would have a problem with you teaching the monks“, he said. “No need to ask permission.” He walked over and plucked a ring of keys from the wall, his master keys for his primary school, and handed them to me. “The southern-most classroom has the best light and a chalkboard,” he said. Before I had time to compute that I was back in the anxiety-boat of needing to teach some holy men their second language in my second language, the sky began to pour. I put on my raincoat and started toward the school but both Mak and Pa stopped me. No one goes anywhere in the rain in Cambodia, they assured. No one. Leakhana called to cancel tutoring and we rescheduled for tomorrow. Pa and I ate about 2 num ansoms between the two of us, then the rain stopped about 20 minutes after it began. I stood up to go and Mak said to me in passing, without turning her head, “The roads will be wet, annoying to walk on. You should just rest.” I listened and rested instead, sweeping up any residual guilt and laziness into my psychic dust-pan and ignoring it for a time.

Tomorrow I will be tired, I will be hot, and I will be confused most of the time. But I will still keep working at this.

One thought on “Day 71 – Permissions & Rubberbands”