It’s Chinese New Year and mak’s Chinese heritage on her dad’s side means she’s in a constant tizzy. All of the previous year’s paper ephemera – for the year of the monkey – have been torn down and replaced overnight with rooster images. The various shrines around the home have been dusted off and replenished with incense, fruit fruits, meat, and beverages for the spirits. A new little plate of offering has been placed on the tractor. The other night we hosted all the elderly women of our family and a visiting monk from a neighboring commune. It was dark out when everyone arrived and we gathered upstairs, right outside my bedroom door on the landing. The monk braided some white thread into little bundles which my immediate host-family – mak, pa, younger sister and brother Ieey and Chiev, as well as my oldest host brother Chou visiting from China – tucked behind their ears. They sat inside a ring of white thread and the grannies and I crowded beyond the white thread. The monk teased me a bit, to everyone’s amusement, and then led a prayer for the coming year complete with sprinkled holy water. “Do you understand the prayer?” asked the monk. I didn’t and he laughed. “No one here does. It’s in ancient Pali.” 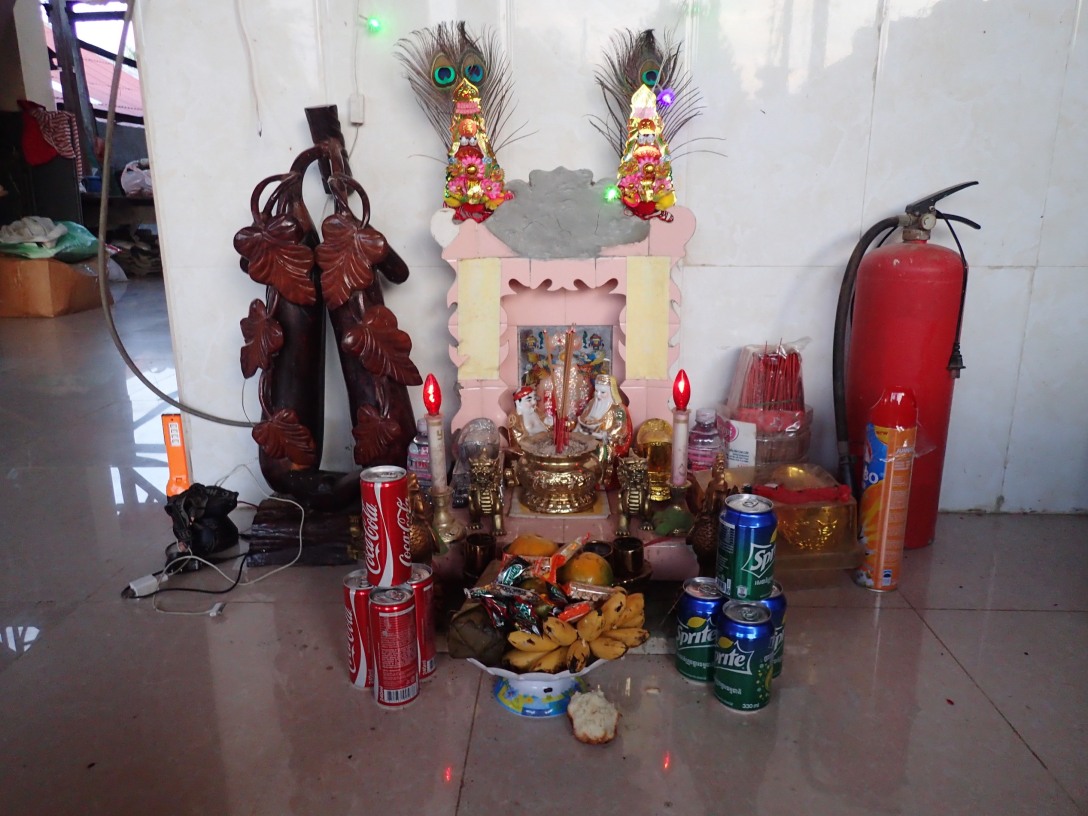 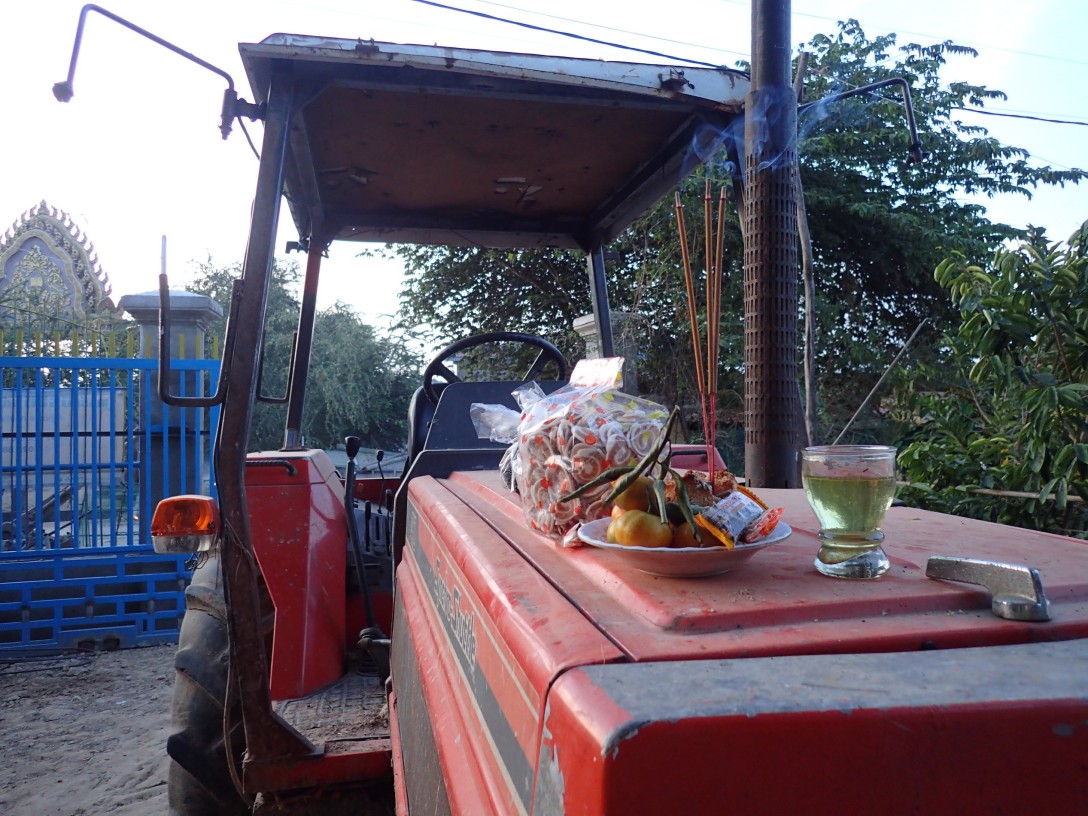 The next morning, on the actual New Year’s Day, I subjected myself to the terrifying dawn walk to the house of Granny Nyor’s – mak’s mak. There I helped make num ansom until dawn. Throughout the day there were fireworks and poppers being set off throughout the village and a thin film of smoke from everyone’s num boiling-fires. My cousin Chhekka and her friend Phia were visiting and invited me over to the home of two teachers from pa’s school, Neakkru Mey and Lokkru Mithona. The two teachers were not only, to my surprise, married, but also related to us by blood in some roundabout way. We ate fresh papaya from their tree outback and Mey’s father beseeched me not to hate him or his daughter given their Vietnamese heritage. Chhekka and Phia laughed and explained that I didn’t share the vitriol for Vietnamese individuals in the same way many Cambodians were raised. Their home was expansive and splendid, directly adjacent to the water and boat landings with a dreamy view of Mount Borei across the flood lands. Chhekka saw me eyeing the water. “Should we go? Let’s go.” 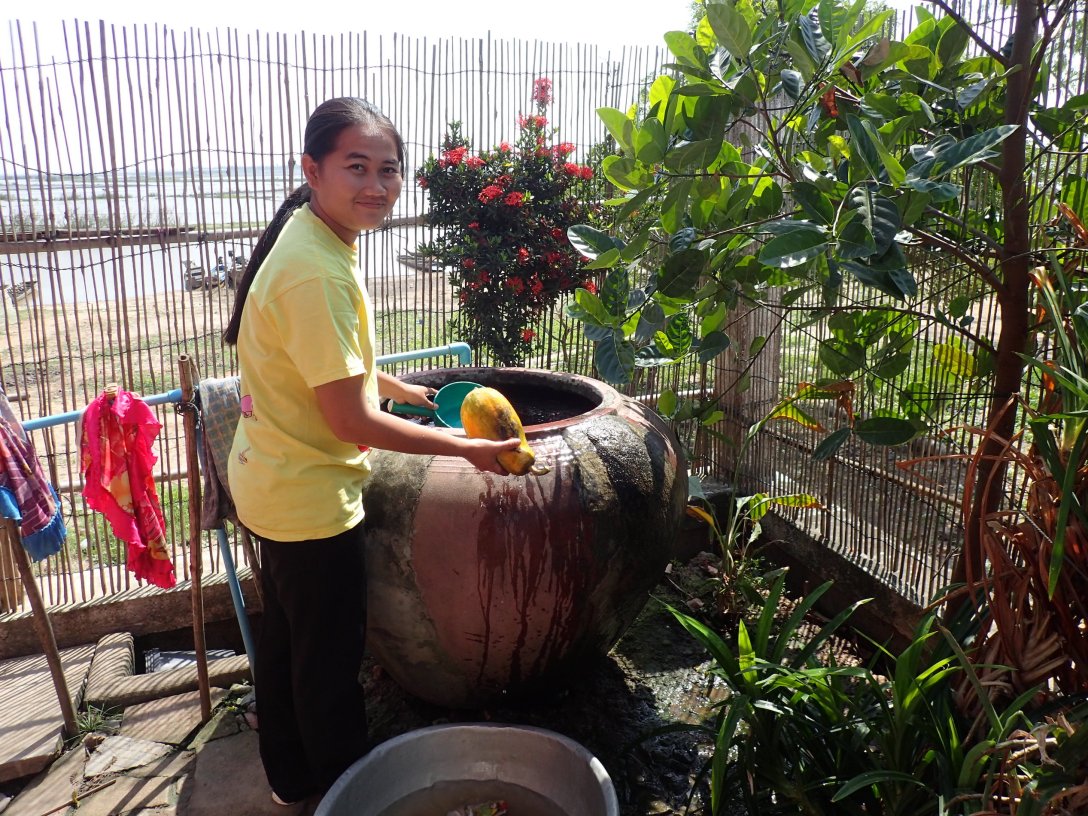 We packed a small picnic bag with crunchy packaged snacks, fresh papaya, and some bottled water then made our way down the stairs behind the house. There were several of the long, colorful fishing boats clustered on the water’s edge and Chhekka indicated which one would chariot us across the lake. Before I could wonder who would be our captain a twelve-year-old boy arrived and we stared at each other until Mey’s sister laughed and told me not to worry, he was a great driver. Just then Mithona appeared, having stumbled from the front yard where he had been drinking with his cousins. “Fear not! I shall be your captain,” he proclaimed which, in his state, horrified me more than the pre-teen who now sat defeated at the prow, having been passed over. All of my shipmates nodded at him with adoration and approval, though, so I climbed over the gunwales behind them. 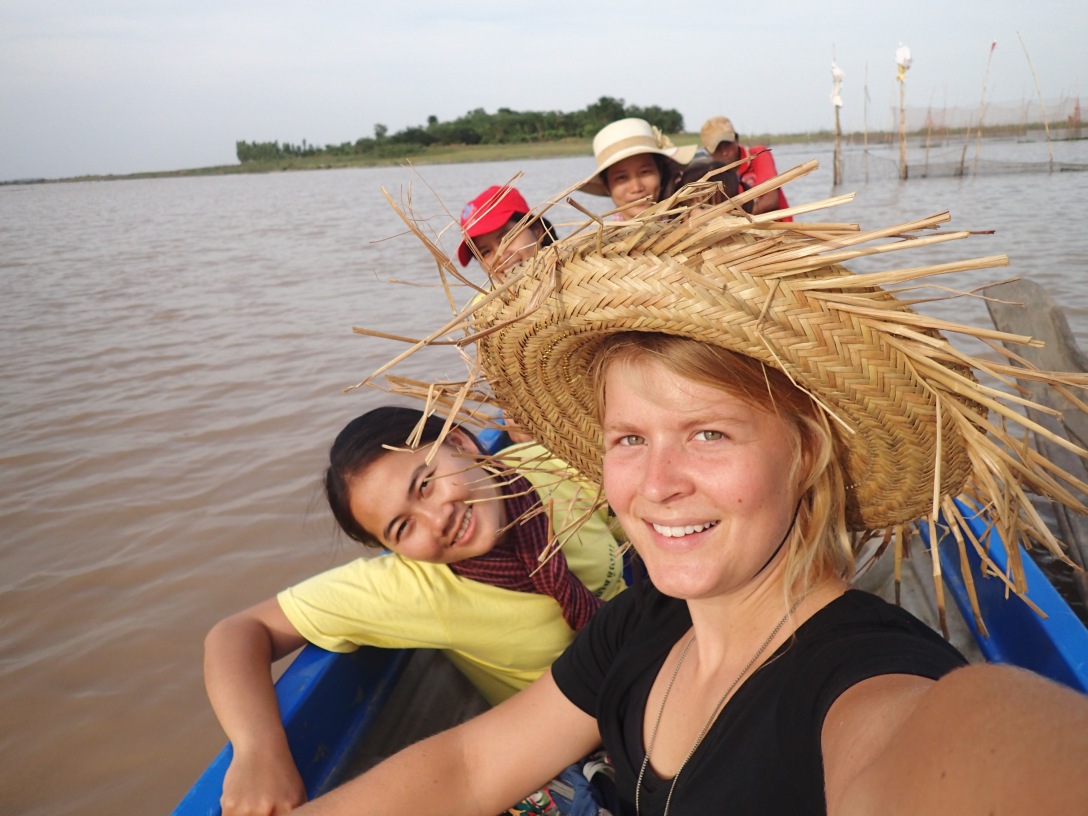 The eight of us – Chhekka, Phia, Mey’s sister, Chhekka’s younger brother, Mey’s husband Mithona, their daughter Chin, the pre-teen would-be captain, and myself – skated across the water with our stalwart and suddenly sober captain in the stern. It is a beautiful thing, to see a place inside of which you’ve lived for a time – and felt so much and grown so much and eaten so many things – from a new perspective. Our village looked comically quaint and fictional from the boat and with the growing distance so shrank all the looming tensions I’d let press down upon me there these past months.

“That’s our destination,” said Chhekka as she pointed to an island about a kilometer and a half away from the shore. Mithona navigated us through what he knew were the deepest and most reliable channels until out long hull scraped against the muddy edge of the island. We disembarked and a flurry of smartphones chirped and flashed as everyone took ten thousand photos. Mithona pressed some fake Chinese New Year dollar bills into my hand and mixed in some English with his Khmer to ensure I understood his intentions. “Kelsey, over there, you ought to take a picture, how do you say… ‘like a boss’?” And so this photo was born.

We met the two families – both older and without children present – who occupy the island, fish and grow their own produce, and love their radios for news and music. We traipsed around the island and enjoyed the fading light and cows and lapping water. Mithona asked me about American government and politics (“How does everyone vote? Do people outside of the country also get to vote? What if you aren’t happy with who’s in office?”) and wanted to know how he could help shape Cambodian politics in the same way. We soon both felt uncomfortable with where the conversation kept ending up and left it as it was. Soon Chhekka corralled us back into the boat for our next destination.

On a houseboat, not far from the island we were received by two older men with beers in hand. The boat-owner was an affable veteran amputee with whom I’d exchanged many smiles in the village as he raced by on a horse-driven cart. They had music blaring from their radio and were more than happy to include us in their New Year’s celebration. “Your foot calluses, not beautiful. Maybe beautiful in America, but not here,” said the homeowner to which I nodded and agreed as he goaded my big toe. We ate papaya, lounged, snapped sunset photos, and sang. The homeowner and Mithona told little Chin some sanitized history about Takeo and Cambodia, the long-ago generations who initially dug our canals through the flood lands and those more recent laborers who’d fortified them in the Pol Pot years. Mithona made the high-sign to leave, turned captain duties over to the twelve-year-old, and relaxed in the stern with Chin. We balanced carefully and yelped a few times as the boat tipped about, then twisted around to bid the two men farewell. I turned back around and watched the village grow closer as we headed home. 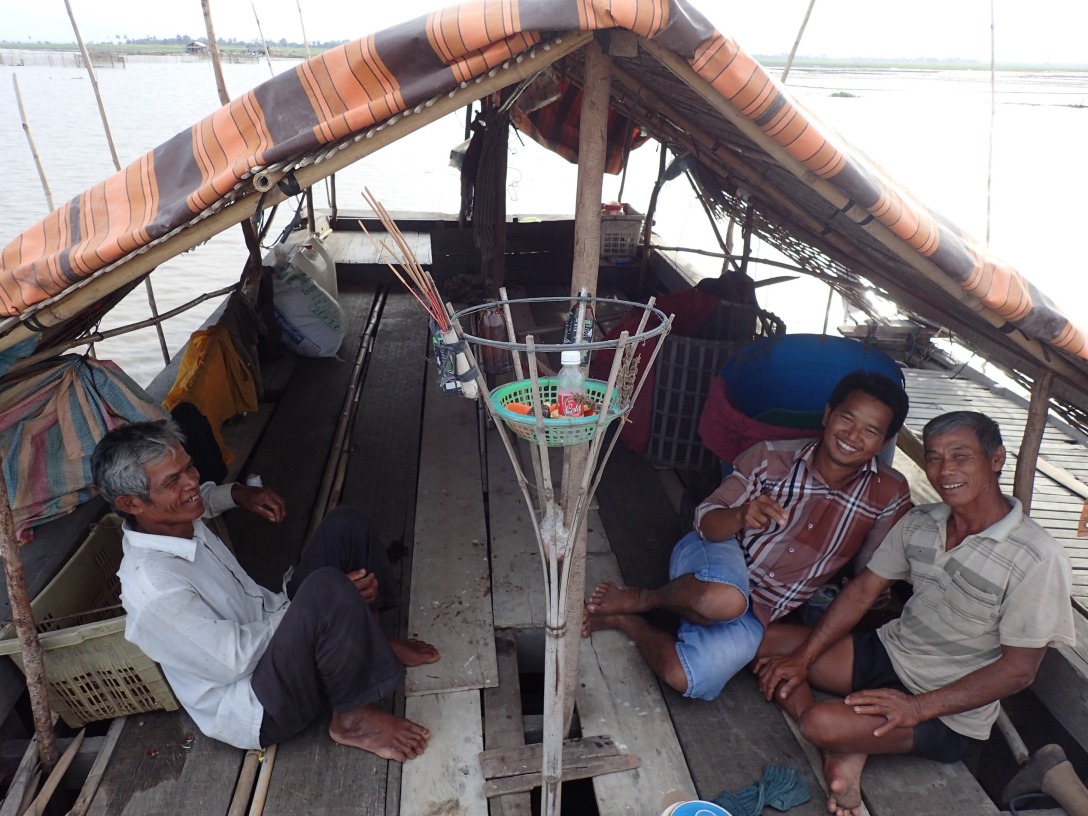 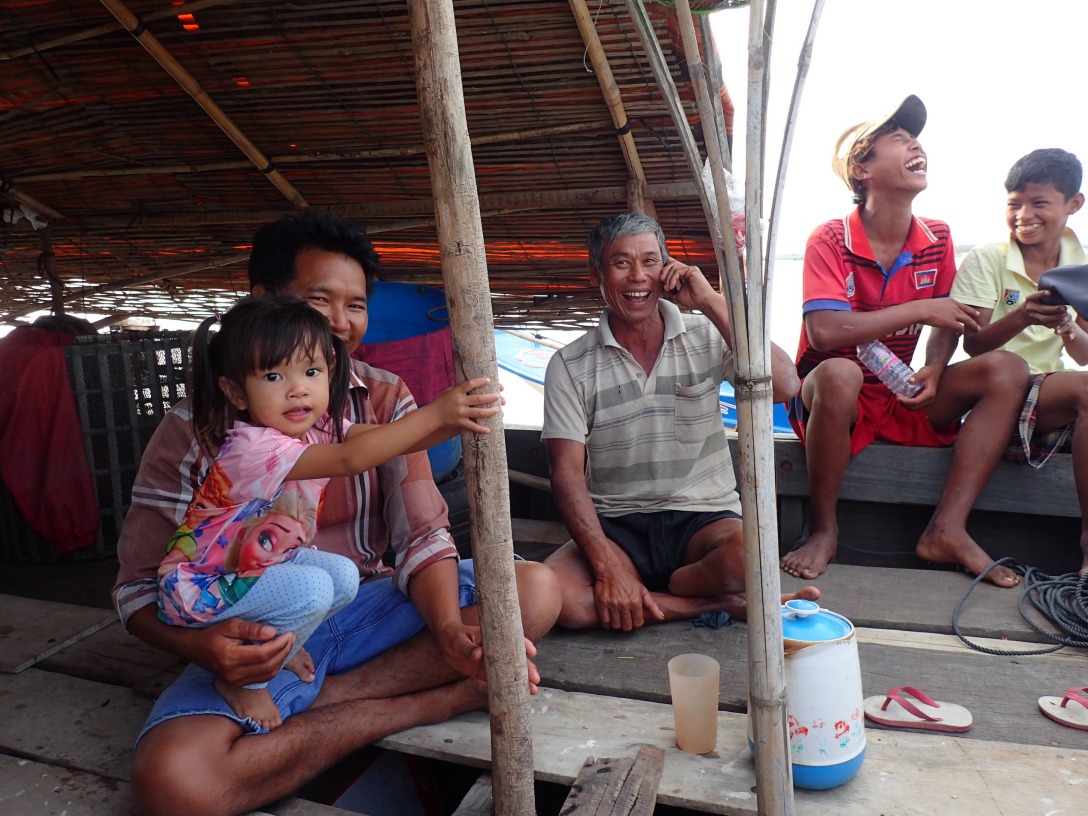