“For to fear death is to think ourselves wise without really being wise, for it is to think that we know which we do not know… death may be the greatest good that can happen to a man.” – Socrates

I am the only person preoccupied with time and/or scheduling in my community. Therefore, by 8:07 AM most Wednesday mornings after an hour of teaching the preschoolers I have broken a light sweat as I powerwalk to reach the health center by the expected 8:15. Not once has this hustle gone by without smiling decline on my part as one or two lounging grannies wave me over to sit and drink tea or just be stared at. Last week, though, my perpetual pursuit for punctuality met insurmountable resistance when I turned onto the main drag and the entire village stared back at me. 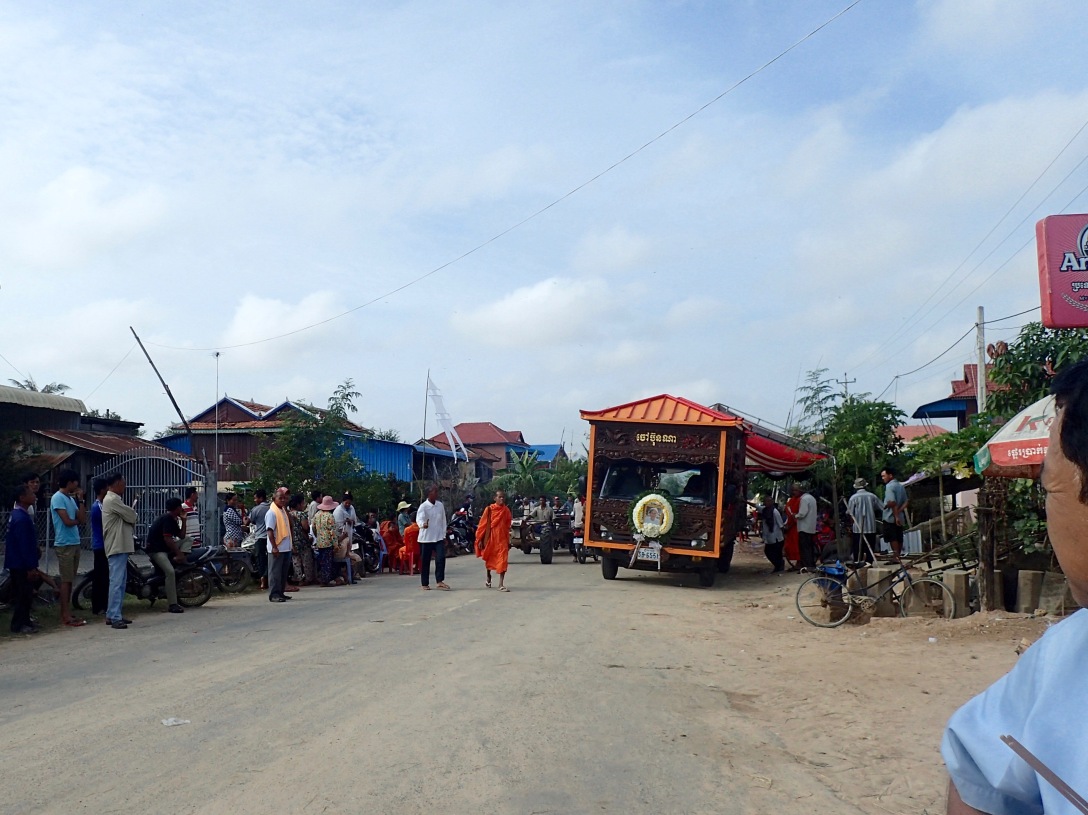 A tractor-full of boys dutifully hammered away on tinny, traditional Khmer instruments while a handful of our monks colluded with some local officials around a large van bedecked in ornate wood carvings. Luckily pa appeared just in time to do some ‘splaining as a dustdevil of aunties enveloped and outfitted me with incense and clementines. Apparently, the village head count was now one yaeey chah (“old grandmother”) less than we were the previous night. Given that her family is both Chinese and Khmer, we were all about to participate in a Chinese funeral procession per her wishes. No sooner had my brain caught up in its scramble to translate than a beautiful band of yaeey’s grandchildren in flowing white garments appeared to march us onward. We were all going to talk a long walk and deliver yaeey to her final resting place in the rice fields behind her home.

Immediately following the boy-band aboard the tractor was a different contraption sporting a glowing golden umbrella to provide shade for one of the community’s oldest and most venerable monks. Then came the grandsons who all shaved their heads before the festivities per tradition. The eldest grandson walked in front with a light rope tied around his head which the grandsons in tow also held in hands of prayer. The incredible van crawled along behind the grandsons with yaeey’s casket on board, surrounded by monks who chanted to protect her from bad spirits on our long stroll. The granddaughters trailed behind the vehicle, weeping. All was orchestrated by a troupe of officiators from Phnom Penh.

The convoy was divine indeed, though not without the inherent hitches of maneuvering a some-odd ton funeral liner around hairpin dirt-road turns caked in fresh mud. Everyone fulfilled their dutiful role, though. The men huffed, puffed, and heaved the beast out of the mud while I sat and watched on with the women (and one uncle who couldn’t be bothered), unperturbed in the slightest. The boys continued to fill the air with wild bells.

With the most testing portion of the drive over, sights were set on a small plot of prepared earth out among the young rice. We continued. As we marched on, one of the granddaughters continuously tossed out leek – popped corn and golden cardstock – as offerings and/or distractions for any mischievous spirits who might otherwise sink their talons into yaeey. 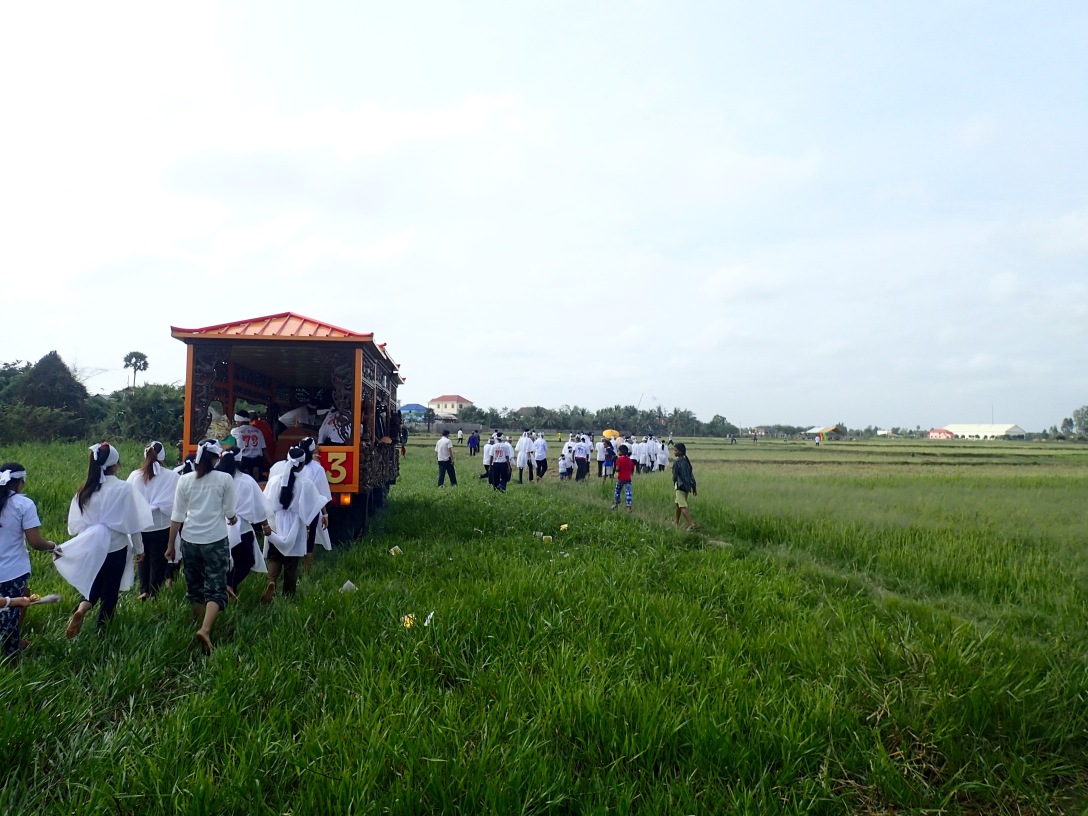 A tent and gathering area had been prepared along with several large, smoked pigs and other delicious tribute for yaeey. It was quiet there and the music swept easily over the flat land. Whereas Khmer families often cremate the bodies of late loved ones, today a burial plot was prepared. A handful of relatives hung back under the tent to prepare pork-on-baguette sandwiches for the guests as the grandchildren continued with the traditional motions per instruction from the officiators.

Grampa, please corral someone with a magical little rectangle who can show you the festivities in their entirety via the following video. I was sheepish, at first, about whipping out my camera until an uncle hollered at me to “Get in the front so your picture will show everyone!”

The procession comprised only half of the scheduled events. Between the “pure” Cambodian and the Chinese-Khmer families in our community, an occasion to raise a tent and beckon everyone is never missed. For any funeral a fleet of hands works all day long to prepare an unbelievable amount of borbor, rice porridge, which is approximately one billion times more delicious than its inherently bland name implies. It begins as do many all the best Khmer rice dishes: with pork.

Giant cauldrons must be manned in order to churn out enough porridge for 200+ guests. The rich, boney broth seeps into the fresh and delicate rice to yield a silky, unctuous meal.And then you prepare the fixin’s: mung bean sprouts, chili paste, black pepper, a dressing of roughly chopped soy beans, lime juice, and/or white sugar. Fried garlic and fresh green onions are usually thrown in as garnish and everyone eats family-style. The food is made delicious not only because it’s what Cambodians love to do, but if it’s delicious enough, guests will drag their laziest relatives from the home to try it and encourage them to – this is key – make a donation to the hosting family. Running a shindig like this certainly isn’t cheap. I heard from more than one boastful grandson that the fancy dragon van alone cost a whopping $3,000 as a rental from Phnom Penh. That is one cup of coffee every day for 32 years. Luckily, everyone in town can be trusted to join in and help hedge the expenses.

I was honored to be invited to help serve guests that evening alongside the other youths and ruffians who are relied upon to donate their evenings to hauling steaming porridge around for their friends and family. I donned traditional funeral wear, a crisp white shirt and black Khmer skirt, and followed the funeral music to the tents. One tent shelters guests while they eat while another is raised to house shrines and a small stage upon which the monks sit and deliver sermons for anyone interested in listening. I stopped and chatted with the regal yaeeys as they awaited the monks’ arrival.

My favorite jobs have always been those in food service, namely for the camaraderie. This was no exception. We all laughed and ate our first round of porridge together as the cauldrons murmured and guests trickled into the streets. Per usual, there were two factions around the eating arena – one of older aunts commanding the younger generation to eat, EAT! beyond bodily capacity and another of younger aunties urging them to calm down, there is plenty of food, and (whispered amongst the teens), the best borbor is eaten after the guests depart, made thick from simmering away all evening. 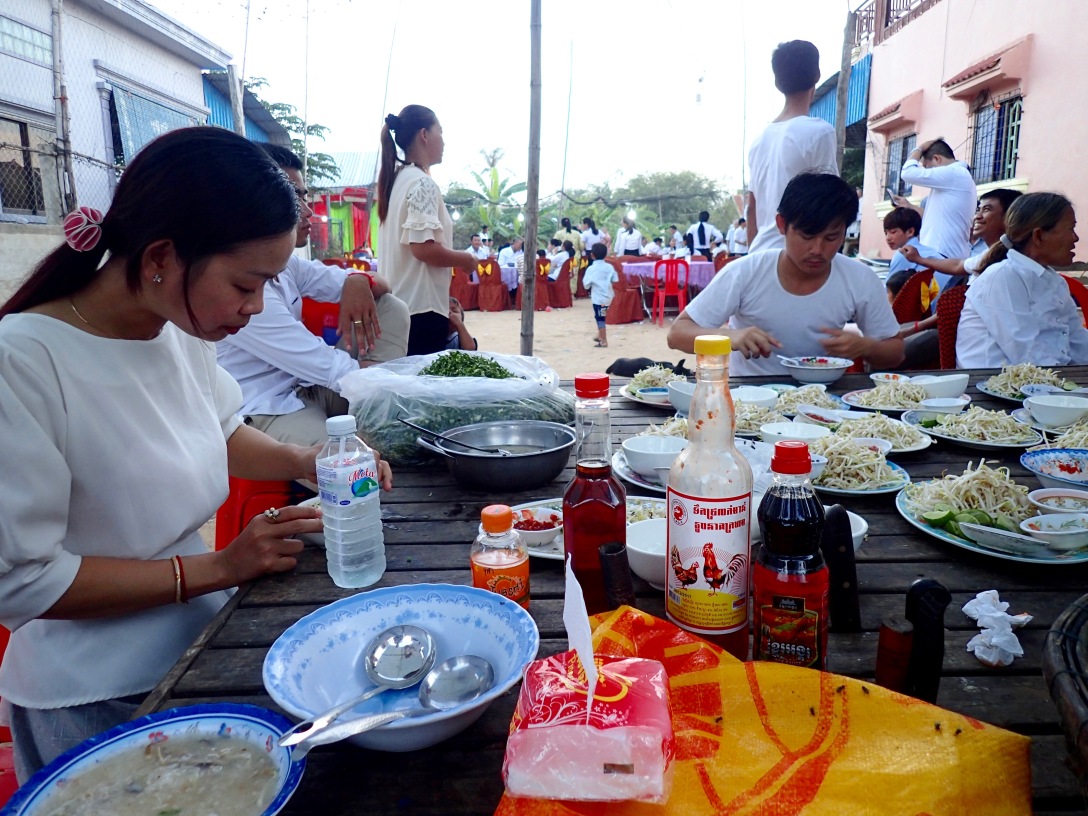 It was a properly catered event. All servers broke a sweat and all guests went home sated. Many lingered and chatted over cold drinks as children ran amok in between the tables. I, however, was beat. I downed my last borbor and left, escorted by no fewer than two aunties and a cousin. We lingered briefly in the shadows to admire the older crowd awash in the sermon as it broadcast over loudspeaker, then I was delivered home. It wasn’t until my head hit the pillow, Buddhist sermon quavering in from the street, that I realized I never did make it to the health center that day.

Grampa, I didn’t know this Khmer grandmother well. All I will remember about her is the great care and love her family poured into ensuring that she rest peacefully. Their attention and tenderness among one another made it clear that she had been the glue for many generations. From my vantage point I could see the great use in the of death of the beloved, to return that precious life force to the soil and sky for everyone to breathe and walk amongst. We didn’t have a wooden dragon van or incense or serve whole pigs when we said goodbye to grandma in Oklahoma, but any time I witness pure kindness or nourishing silliness, I believe we did a decent job of giving her back to the universe.

P.S. My attempts to corroborate most of my information/interpretation of the ceremony was done casually with a handful of the grandkids – mostly teenage boys – while we snacked on shrimp cakes and tea in the street. They were eager to talk about their customs but couldn’t always answer my why, why, why.  When in doubt they would just crinkle eyebrows at each other and settle on, “because of… tradition.”