**As a disclaimer, much of this information is adapted from Peace Corps Cambodia’s description of the Pchum Ben holiday as well as descriptions from village friends and fam, translated with earnest but ever susceptible to misinterpretation.

You might recall Pchum Ben as the first big Khmer holiday in which I partook last year when I arrived at permanent site. If my face then was at all telling it should have been clear that my understanding of Pchum festivities at both face-value and any shade deeper was absolute zilch. A million and a half things in the village have changed drastically since then – mute babes have become chattering toddlers, wooden lean-tos have given way to multi-story stone manses, and the elderly crowd has finally succumbed to the refreshing pick-me-up of a once-scorned (Vietnamese) iced tea. Ever the champion of tradition, however, Cambodia had the countryside alive with incense and the clang of bright bells for the past two weeks of Pchum Ben Festival, just as it has every year for an innumerable score of generations past.

Cambodia is predominantly Theravada Buddhist, thus many Khmer families take great stock in karma, reincarnation, and the interaction of the two. While good karma and merit garnered during life can secure a comfortable and even lavish afterlife, those with poor karma may find themselves woefully trapped in a post-death limbo between the afterlife and the living realm. Those considered greedy or glutinous during their lifetimes may be cursed to take the form of a perpetually starving ghost with a mouth too tiny for sufficient feasting (“Too small even for corn! Just imagine.” – Mak Yaay Meng). On a day which usually falls in early September every year –  though it is truly determined by the Khmer Lunar calendar – the gates to this hellish purgatory fly wide open, releasing these tormented spirits back into the realm of their living progeny. Khmer generosity for the dead mirrors their hospitality for the living: food.

Over the 14-day holiday period, village families are assigned turns or “shifts” for which they are welcomed to the wat to nourish the residing spirits. This nourishment is facilitated in one of two ways. The first method of ghost-nurturing is through direct offerings of physical food to the spirits. On their shift families will prepare an offering platter of fruits, cakes, drinks, etc. which at least one family member will take to the wat in the evening for blessing. The offering can be left with the groundskeeping-dishwashing-monksitting-grandmothers (yaays) who preside over that particular wat. These yaays will help peel and cut your fruit, chop up your sugarcane, and prepare a batch of sticky rice with coconut to smash into balls as an additional offering. These rice balls are what give the holiday its name, as noted above, although it also called “Ancestor’s Day.” The living then have two weeks to appease these restless souls. Before dawn the following morning, usually about 4 AM, the Buddhist equivalent of pastors (lok) broadcast recordings of famous traditional singers and sermons through the sleeping village as families return bleary-eyed to the wat. In the wat-hall we say a greeting to the Buddha seated in the west, light incense which we left burn in the east, then sit for prayer which fulfills what I have decided is an unspoken request on the behalf of the deceased which is prolonged suffering of the living in the form of legs prickly from blood constriction due to awkward wat-sitting etiquette. A stint of prayers is done facing the east (khang gkaut “the direction of the birth [of the sun]”), a quick stint to the south where the monks sit, then west, but never toward the north. Although families are assigned shifts so that they might come a few at a time, many families in my village admit to their laziness and go only at the very last minute, on the final night and early morning, when the wat can be found choked with fragrant fumes and sleepy faces.

Once we’re all blind with candle and incense smoke and humming from the monks’ chants in Pali, a grandfatherly lok gives the subtle but exhilarating intimation that “it is time.” With a flippant wave of his small hand everyone scrambles to snag their offering plate, paper ghosts trailing from long stems, and fights their way down the stairs and towards the cathedral. Around this tall, ornate building the loks have placed several large aluminum basins on each side of the cathedral’s elevated platform. We travel in a loop around the building, circling thrice, tossing a handful of treats and sprinkling drinking water into each of the basins. Given that the spirits are said to fear the daylight, it is hoped that they will do their feasting on these goodies before the sun makes it climb up from the horizon.

The second way to feed the hungry spirits is through feeding the monks as a conduit. Monks can eat only from the early morning to midday and are permitted only drinks between then and the following morning. What is more, they are discouraged from cooking for themselves or buying their own food. Thus, they often subsist on donated food from the community and Pchum Ben is no different. However, during this special two weeks it is thought that the sustenance provided to the monks will transfer to the hungry spirits. At midday every day many adults and elderly don fresh clothes and deliver diverse and colorful meals to the monks for their final meal of the day – and what may be the first meal for some of the spirits since last year’s Pchum season.

In addition to food, community members make monetary donations at the wat which are used for community upkeep. On the final day of the two week holiday, everyone gathers in a long line at the wat for the monks’ procession through the crowd where they are showered with gifts of money, food, and other treats so that merit may be transferred from the generous living to the needy dead. 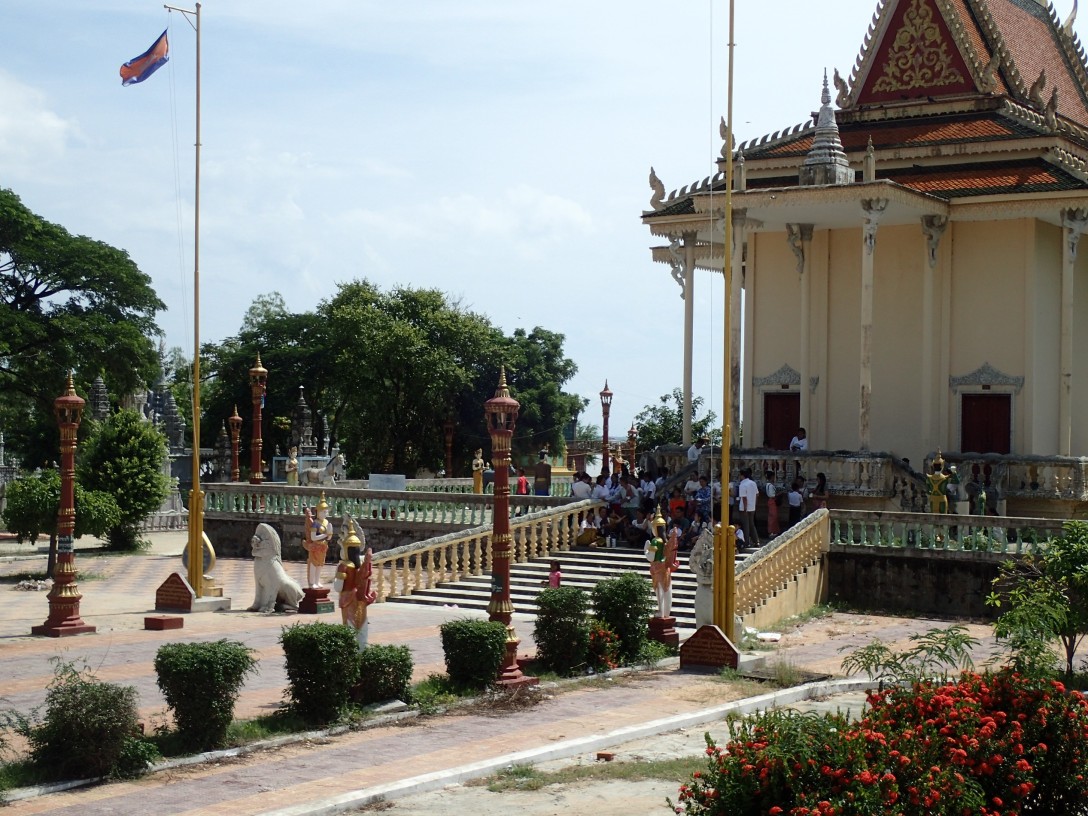 I asked Yaay what happens if people think that their relatives all passed on with good karma and aren’t in danger of being as damned as all that. She said, “It’s not just about our own relatives, it’s also about protecting from the spirits of those unrelated to us who simply want to annoy us once they die! Look around at everyone at the wat next time. You might see someone who you know wants to die just to haunt you.” In truth, though, my Pchum wat-times were met only with fun. I ended up being dragged out for multiple pre-dawn mornings by one neighbor or relative one time after another. On the final day, though, my host-mom did not think to invite me with her for the big monk-parade. I went on my own and floated from one family to the next – all of whom can expect wild amounts of scones and autumn apples from me every September, should they choose to haunt me.

Grampa, I know you to be a master of good karma and kind-vibes so I have no fear for your spirit. If you have a mind, though, to be terribly naughty in the next thirty to forty years of life I expect from you, I can confirm a spirit seems to live a fat and happy life for at least two weeks out of the year here in the Kingdom, even if it means rising early.