Yesterday we had one of our typical monthly staff meetings at the HC wherein we crowded around the giant table in the pre-natal care room and tried to look up to spec as the chief had one of us (me) circle and take several dozen edifying photos. There used to be a time when I would get a lot of writing or sketching done during these meetings, having little or nothing to contribute. At this meeting, as with all of them nowadays, I was invited and expected to speak in order to keep everyone updated about our project trajectories and the like. I babbled about the outline of our water tower and hand-washing project, then listed off the gardening supplies Vuth and I had purchased, often forgetting to breathe in between hackneyed Khmer. When I stopped I began to deflate in a silence which always frightens: Oh god, was I completely incoherent, did they not catch a word I said? Then everyone broke into smiles, agreed, thanked me, and we moved on to the next item. Upon adjourning we went out front to take several more staff photos because the chief said we looked extra beautiful and no one protested. He even went so far as to interrupt Srey Muel (the woman speaks constantly) to position Vuth and I in the center. “Partners,” said the chief, and we beamed. 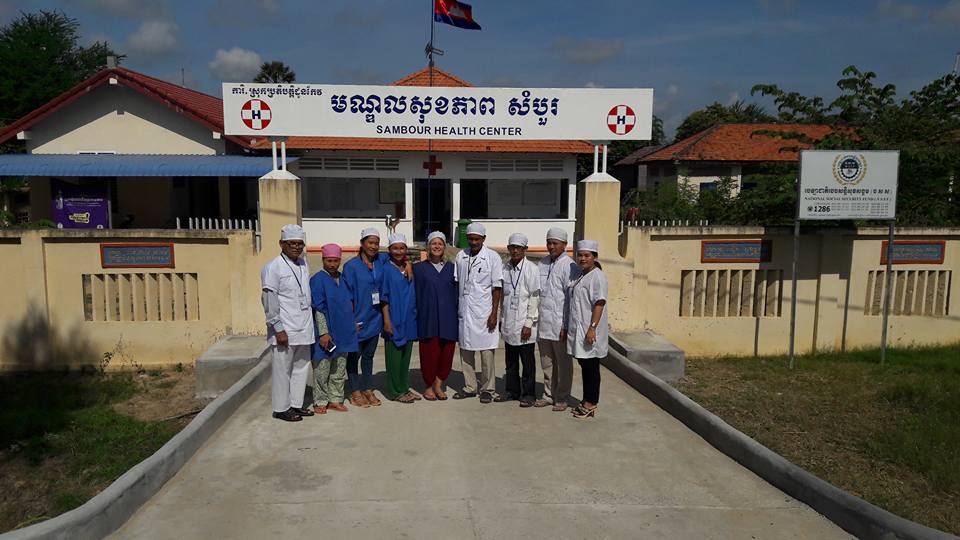 Vuth and I then killed some time just sitting on the chilly stone benches out front. He opened up first, announces his headache which gave me pause. I’d never known him to complain of a physical ailment, a doggedness unique among his peers who every day sport some horrible new black-mark of death. He parted his hair at the crown to show me a shiny scar on his scalp where, he said, a bullet had grazed him during his time as a child-soldier in the Lon Nol army. Without rancor or theatrics he articulated how he and his fellow soldiers (on the Lon Nol side) would shoot and kill the children of the Khmer Rouge faction under the orders of their “keepers.” He was in the hospital for an entire month and “didn’t know his own body.” After some silence in which I didn’t know what to say, how to convey my gratitude for his divulgence or how to console, he perked up and suggested that Saturday we should prep the dirt for the health center garden.

It’s school vacation and Srey Heng is constantly up in my business as a result of boredom. In between trying to placate her with colored pencils and the like, I managed to call some mothers from O_ P__ Village and invite them to participate in our fish and moringa powder workshop at the health center. With their enthusiastic agreement, I went to the market in search of tiny fish of which, everyone had assured, I’d find plenty this time of year. Although it was morning and the market was at its capacity for the day, I saw no tiny fish. Before I had the opportunity for distress, though, Neakkru Lim, the elderly library keeper for pa’s school, waved me over as she buttoned up her nice teaching blouse. She saw me making a sour face at the fish stalls and asked how to help. I explained about the fish and she quickly called over two young girls who had been lounging in a hammock watching YouTube videos. Neakkru communicated the situation and the girls nodded, each donned long swathes of fishing net, and scurried down to the boat landing. Neakkru hopped on her moto and told me to go ahead to work, that they would deliver some freshly caught fish to me at the health center. She grinned, waved, and zipped off in a puff of exhaust. I waited anxiously at the health center for all of 17 minutes before one of the girls biked up with a giant bag of tiny fish, a whole kilo and a half, she said, all for $1.25 USD. She too waved and sped off as I scurried to find a proper receptacle for the giant dripping bag of tiny fish and shrimp I then held. On my way to the immunization fridge, I took the fish for a quick tour in full view of our four midwives to both 1) remind them of the workshop we all agreed on for this afternoon, remember? how we all agreed, guys? and 2) scare kids. At some point I walked out front to snag some leafy branches from Ole Faithful, the stately moringa tree by the health center gate. I found no trace of its existence in the soil, as if it had vanished. Then I spied its corpse in the drainage ditch. Vuth appeared and explained that he had to cut it down, the Ministry of Health mandated that he make room for some elephant statues by the gate. He reminded me of the moringa trees in front of the commune office next door and I went to examine them, then stood among them in disapproval of their puny, travesties of leaves. Vuth watched me sigh deeply and walk back. “Do you grieve for the tree? Do you regret that I cut it down?” he asked, “I had to, Kelsey.”

I’d barely taken the fish from the fridge that afternoon when the midwives had me flanked, simultaneously listing off this reason and this reason and THIS reason why the fish powder would never, ever work. By the time they’d followed me to the spigot out back where we’d wash the fish, I finally turned and asked them to trust me (“place your heart-mind on me” in Khmer). They looked at each other and laughed, then we got to work. All the neighbors and patients who strolled through while we were toasting the fish and pulverizing the dried moringa leaves were highly interested. There was only about a 10 minute period when all the midwives were on their phones and snacking while I did the heavy lifting. We gave out a few samples for mothers to take home to mix into their kids’ rice.

That night I let my cousin Uey drag me to the wat (again) for evening Pchum Ben prayer and then (again) at 4 AM. I sat uncomfortably in the hour before dawn and was man-handled by grandmothers who know, from Buddha himself, it would seem, all the most sinful arrangements of my physique and where to hit me when I should alter my position. To be honest, I hated all of it. Every minute. If there’s a god I can’t imagine anything he cares about less than what the hell I do with my body. Since I decided to accept dad’s offer to visit home – home home, the States – I find myself angry and resentful of everyone here. Before, I had figured out how to love and endure these everyday tormenters, from the incisive 6th grader to the pejorative grandfather, simply because I had to. I made the commitment to live here for 2 years and with that comes the compulsion of building a life for oneself. To go home, however, means to return to a place where I’ll remember in every moment that I don’t have to have a goddamn thing to do with this village of bullies at all.

Some hours later I had to put my head down for a moment and midwife Sina asked me what was wrong. It was kind of her.