My host-cousin Sieklin was one of my first Khmer friends. He confidently approached me – the clearly apprehensive single female patron in a sea of men – at the café in our village. In outstanding English, he excitedly explained our ties. Ever since then we have enjoyed a remarkable friendship, notable for our platonic male/female dynamic in a rural village.

This progressive power-pal set-up is due in large part to Sieklin’s open mind and shiny curiosity. We had barely a month of village antics before he pulled a fast one and passed his national exams, packed up his things, and moved to Phnom Penh for university. He’s uncomfortable in the city; he misses village life and doesn’t hesitate to tell me so. But the distress of the capitol hasn’t marred his ambition to someday serve as an international delegate. Little by little over the course of two months, we have chipped away at an application for scholarship for him to study in America. I can’t imagine a better candidate. Aside from his superb English, I’ve appropriately schooled him in the ways of cheese, burgers, cheeseburgers, and French toast. He’s gluten-ready. 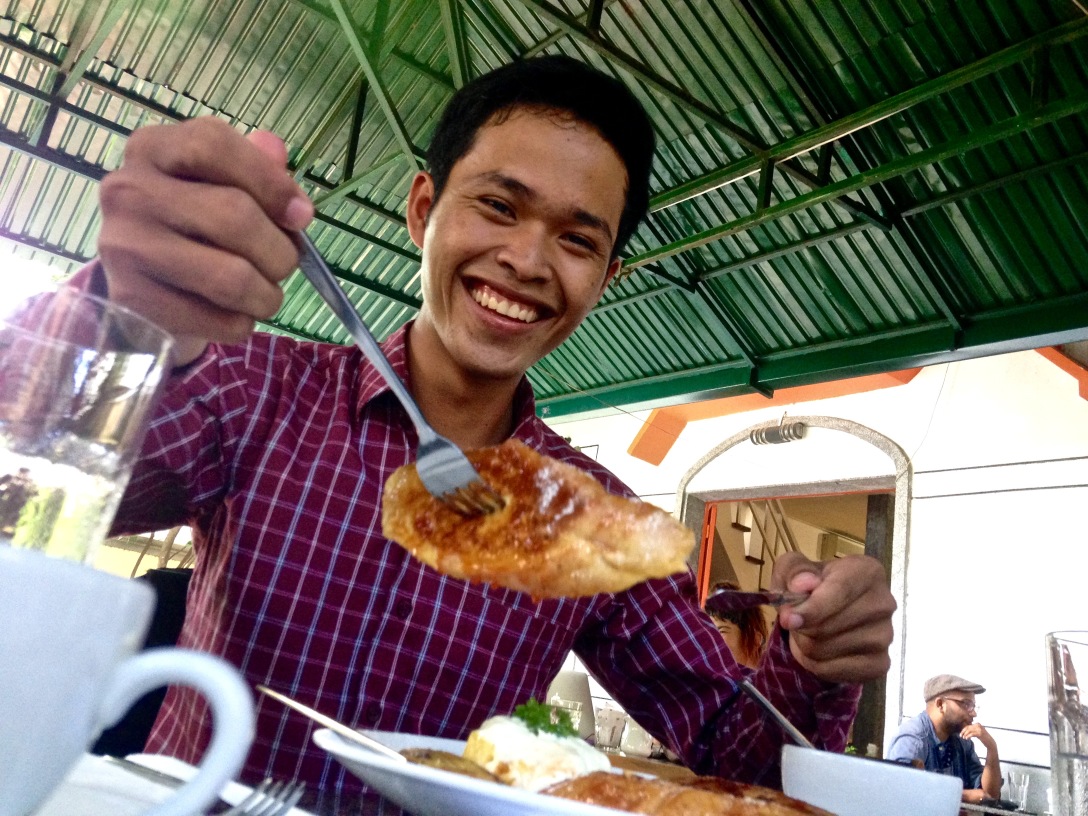 Sieklin exemplifies the knowledge-hungry, liberal youth of Cambodia who can envision a different kind of future for his homeland. I’ll never forget when I leaned over to tease him about playing around on his phone too often only to discover him intently following the English subtitles of Obama’s latest address. If there is one thing that sets him apart from the flood of Khmer youth vying for space in international offices and classrooms, it is that Sieklin’s vision extends beyond the prospects of wiring money home for a new car or second-story for the family home. He can envision a Cambodia prosperous enough to stem the stream of bright youth flowing abroad for viable fiscal opportunities.

The latest casualty of Cambodia’s depletion of human capital was suffered right in my village. Well, it wasn’t suffered so much as… celebrated. My proverbial second-family here, the owners of my daily café, would soon send their oldest son, Hanh, off to China to study Chinese language for two years and then “business” for the remaining eight. Ten years total. The only plane ticket purchased was the one-way ticket there. Trips home were not a part of the plan. Hanh’s parents invited me to see him off in Phnom Penh along with his younger sister, little brother, and 25 people from our village. 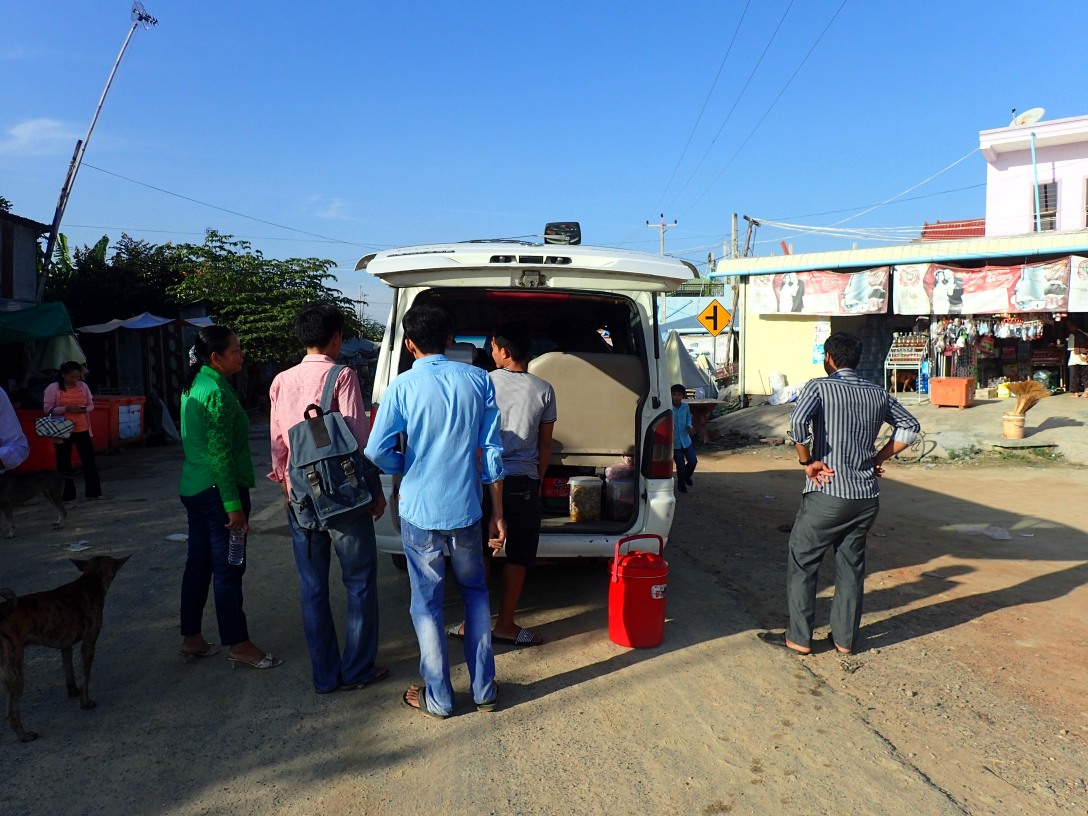 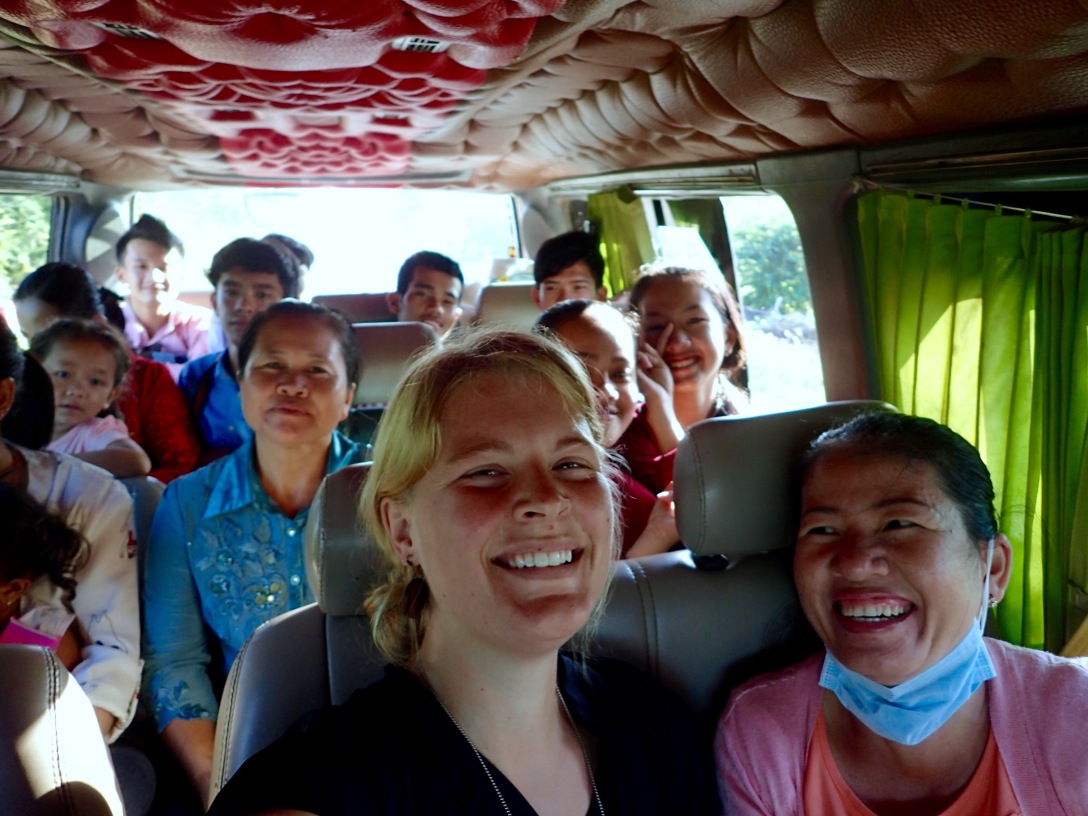 Among the crowd was my host-brother, a quiet kind of guy and one of Hanh’s oldest friends. They shared a desk all throughout middle and high school. My brother is on the opposite end of the spectrum of Cambodian university students. Without the financial resources or outstanding academic transcripts, he studies at a smaller university near our provincial town instead of flocking to the city or abroad as is the common practice today. Nevertheless, bidding his best friend a long-term goodbye was met with the same jocular nonchalance as when they all split after a soccer match. It is possible that he’d been through a similar bon voyage tour when his older brother also left to study in China few years back.

I am told that my village has seen hordes of its younger working generation depart in the last decade. A coworker noted that our health center’s distribution of birth control has plummeted in recent years due to the export of our women of child-bearing age to Thailand for work in chicken processing plants. Atrophy within the skilled labor force, however, can be attributed in part to last year’s implementation of the ASEAN (AEC) agreement which carried with it an attempted commitment to liberalize the exchange of skilled workers among ASEAN countries via Mutual Recognition Agreements (MRA). The MRAs theoretically assist the educated workforce in toting their Cambodian degrees abroad. Still, it is of note that with every fulfilled opportunity for a Cambodian to go abroad – whether for school or skilled and unskilled labor, alike – comes at the cost of their voting rights in national elections. 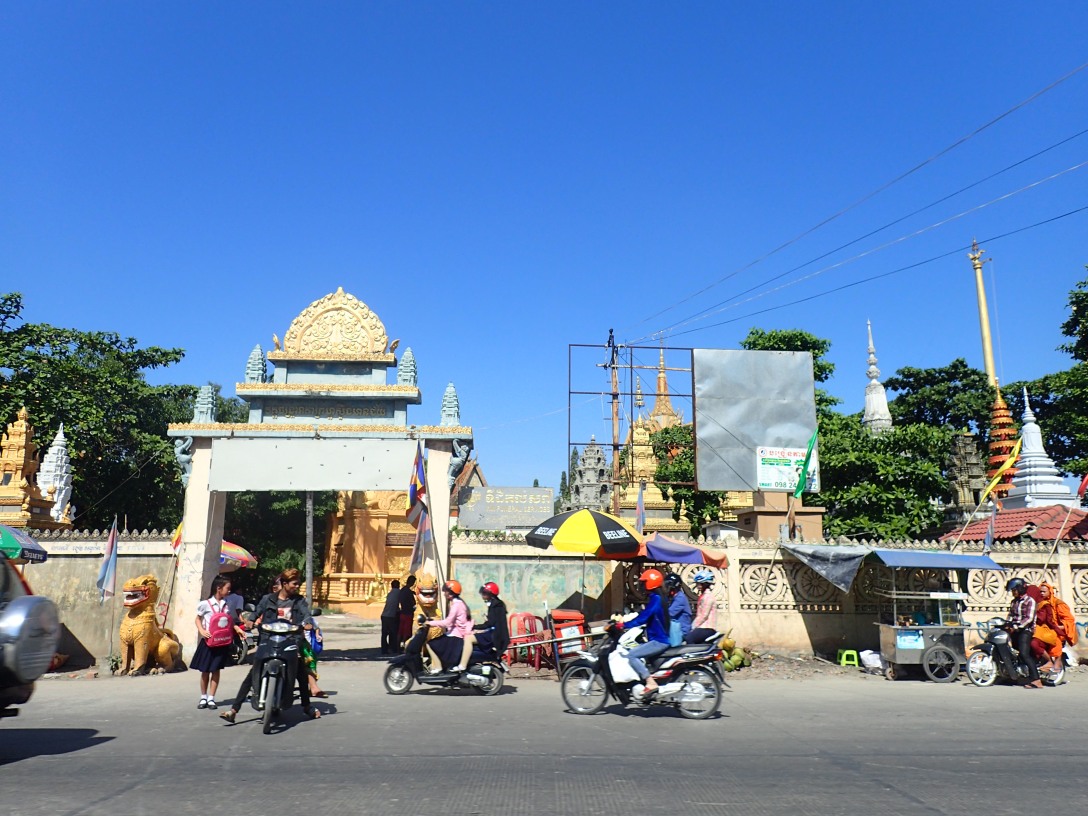 Some have argued that Cambodia’s greatest deficit lies within the education system and that welcoming skilled labor from other ASEAN countries will “tide us over” while improvements can be made in the education sector. The true problem, however, lies in the fact that motivation for lasting reform and change does best when orchestrated by champions rooted in love for the place in question. Although their skillset can now be more easily replaced, when native Cambodians emigrate for work they export with them that inimitable love for their homeland. The descent of our village troupe via escalator into the jarring sterility of AEON Mall afforded me a view of the diverse sample of international employees on lunch break in the food court, where Khmer food can be easily avoided for their preferred cuisine.

We, on the other hand, were certainly about to miss an opportunity for familial rice. Travel to the capitol be damned. The van slowed momentarily en route to the airport as Hanh hopped out the window and headed to a gas station with a duffle bag full of “fancy clothes,” his mother laughed. He soon rejoined us, dressed to the nines, as rice and chicken were being assembled from Tupperware out the back of the van. Some of the most tender moments of the day were spent squatting in various parking lots among the ming ming and puu puu (“aunties and uncles”) as they simultaneously inhaled rice, fed the children, took phone calls, and heckled the teens all huddled together on the sidelines. I couldn’t get enough of Hanh in his suit, wolfing down enough of his mother’s rice that it might stick to his ribs for 10 years. For a father who was about to bid his son adieu and a son about to leave the only way of life he’d ever known, neither showed any symptoms of despair. Though it’s possible that their trademark cheerfulness was buoyed by the rice, such is its effect.

As the sun began to set, the merriment was punctuated by faces made somber for photos, as is the Khmer way. I recalled my own excitement when leaving for college, knowing now that I never could have known what lie ahead, only that it would be different. It may have been a similar curiosity that propelled Hanh toward the runway. I imagined the whirlwind of new experiences inherent in beginning college, all combined with culture-shock and the impossibility of visiting home. What would Hanh miss the most about his birthplace, our village – the lake, the rice fields, the generous families, the ever-available playmates, the ease of speaking his native tongue. And what might he someday bring home aside from a paycheck, I thought. If I had written him a wishlist it might have included encouragement of creativity and debate within the classroom, tolerance of other ethnicities and customs free of harassment, and open discussion about shifting the gender-role paradigm. But I knew I oughtn’t weigh down one boy with my hopes for the entirety of his generation. I caught his mother’s eye as we postured and suppressed giggles for photos. I thought of the leaky roof over the area where she washes dishes and I found myself hoping she would have enough spare cash to fix it soon.

Hanh made a final tour of gentle shoulder-pats among the aunties. They all lovingly swatted him on the arm while avoiding full hugs which would have prompted tears. His dad’s sudden spell of emotion could well have been gauged by the alacrity with which he disappeared following a brief embrace with his son. In retrospect I may have been the most visibly pained, my cheeks hot with repressed tears. It is a difficult thing to watch a village put a treasured piece of their lives for the past two decades on a plane to what may as well has been another planet, let alone do it without allowing themselves so much as a sliver of undignified grief. While I know these people to be kind, giving, and warm, they conducted themselves with formality and grace in the face of sorrow. Hanh’s profile hardened as he made the final march to the revolving doors, yet the sweet, young roundness to his face would likely remain for a few years more, I thought.

Like that, he was gone. And so the community trudged on, awash again in a tranquil resilience that exists only among those who have worshipped, grieved, and grown together inextricably for generations. Hanh’s father reappeared when more rice was doled out, whatever turmoil he’d run off to work through apparently resolved for the time being. When I recount this adventure, I think of two faces in equal parts. The first is that of Hanh’s dad’s priceless grin as he ate that second dinner, turned firmly with his back to the planes launching behind him, perhaps basking in the assurance that he had satisfied what some consider the height of parental achievement for his eldest. The second was that of Hanh’s younger brother, Tin, his eyes fixed on the tarmac as we began our long drive home. Certain though I was that the absence of his brother would strike him in the usual ways, I dared wonder no further about the mysterious inventions currently churning in his young, precious, irreplaceable mind. 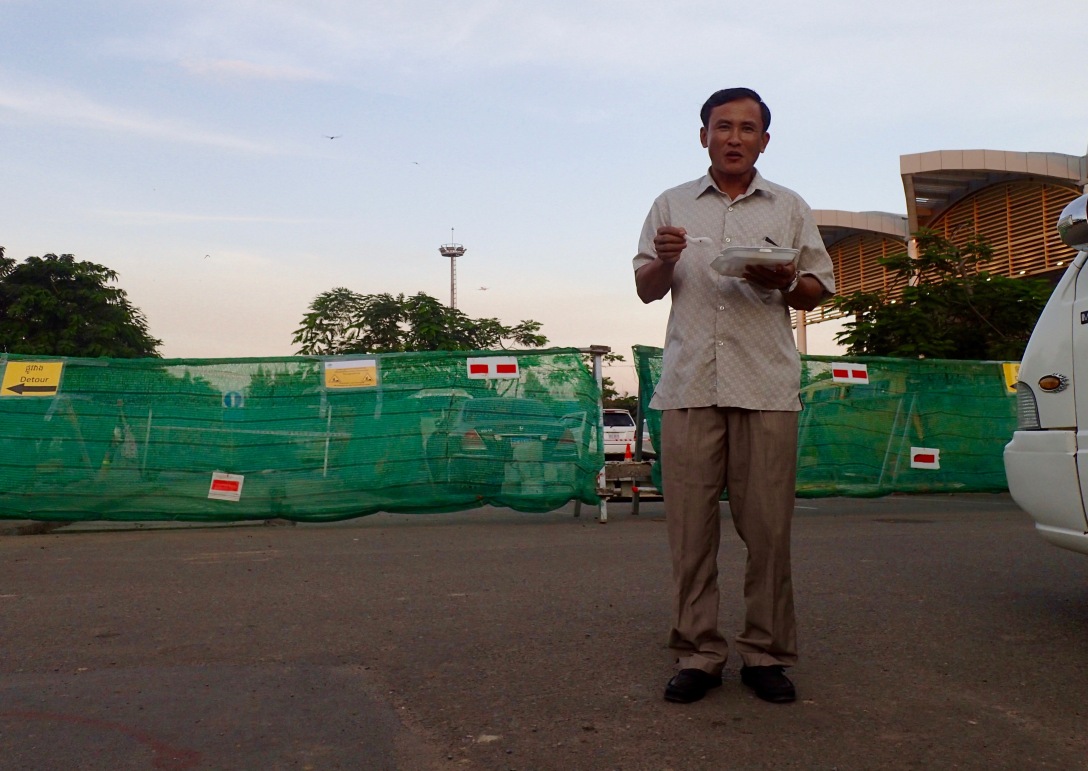 Grampa, you may have noticed while reading this that I’m not exactly home either. I admittedly drained my brain right out of Oklahoma coming up on seven years ago. When I left, I also believed that the only opportunities worth a damn were simply elsewhere. It is only lately that what formerly seemed like a single, branchless path shooting into the future and away from the southwest has begun take on the sensation of a boomerang’s arc nearing the farthest point and beginning its return. Because isn’t that the sweetest of travel tales? To leave without intent to return only to contentedly end up back where you began with a lot more to give than when you left.

Love you, all the time,