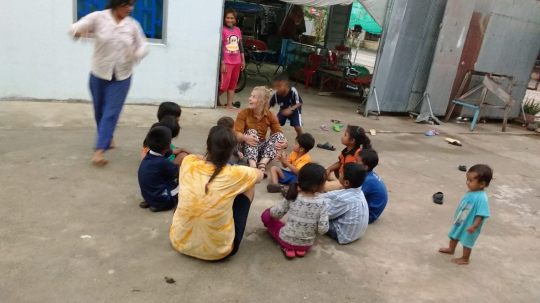 Bahng srey laughing as Mai tries to teach the kids how to play the RIGHT way. 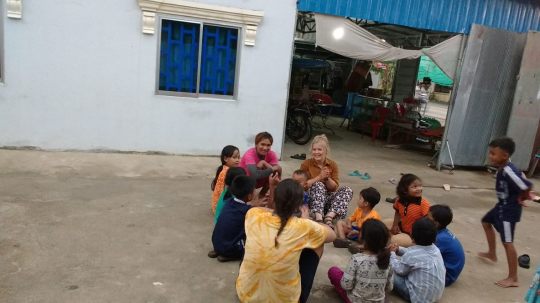 We had no idea what this game was or how it worked. But we played along for nearly half an hour.

We continue to play hard and work harder while our families keep us fortified in rice and patience with our juvenile Khmer. This post feels heavy on the American faces, heavier than I would like. But as I have mentioned before, I’m still getting to know my community and want to hold off on whipping out the camera for every meaningful interaction. In time I’ll be able to share shots of the pristine roadside garden tended by pu (uncle) Bo who dons a crisp white tunic every morning, the sensory menagerie of the market near school, and the faces of the dozen neighborhood kids who await Christy and me at the end of most school days. In time. For now, I’ll share the small and mid-sized victories of the week. Examples of which include 1) little sister is learning her ABCs like a champ and, 2) my host brother taught me how to use the coconut grinder. Chnyang. Delicious. 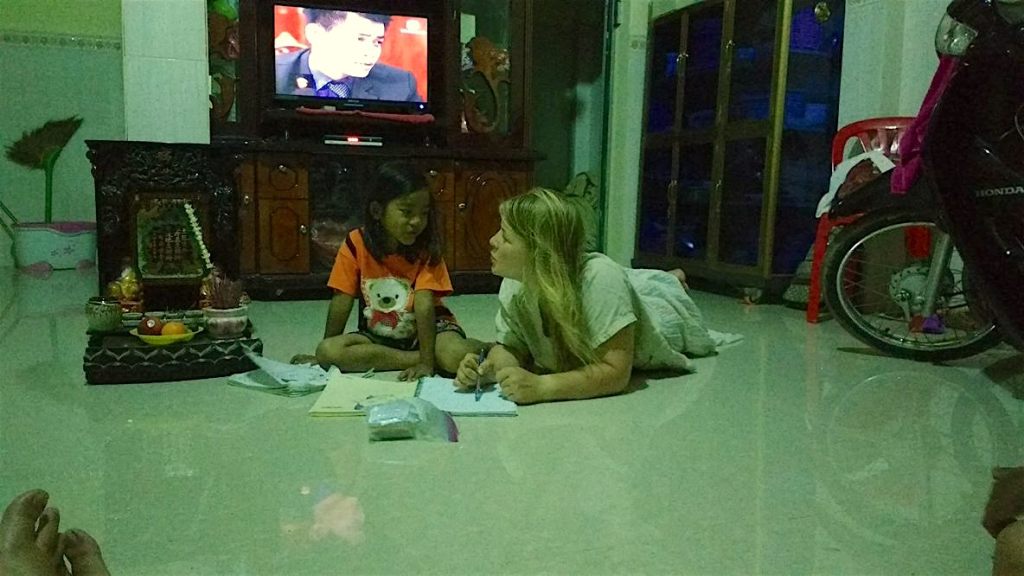 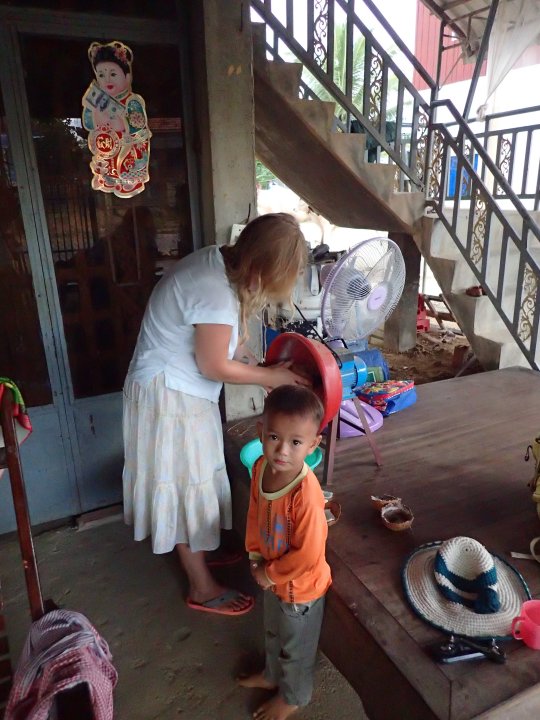 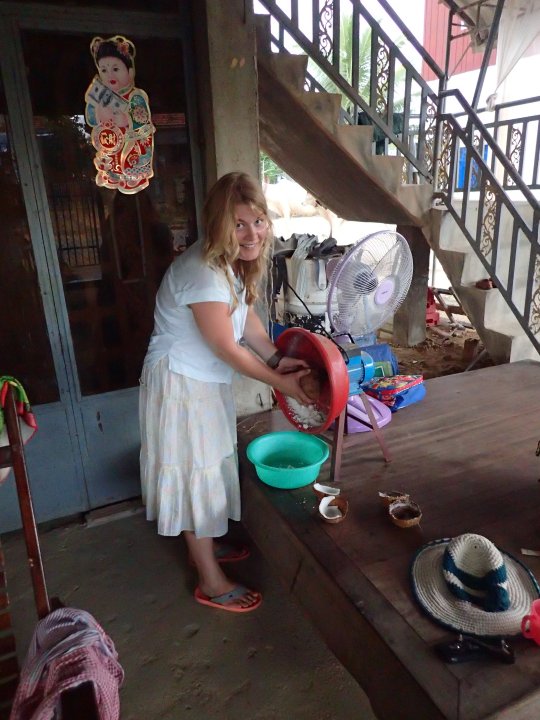 Given that we are neaksmachut ahprum sokkapiep poom (community health education volunteers), we have had multiple practicums each week. Thus far, we have toured a local health center transitioning into a referral hospital, taken blood pressure and done a diet recall with patients at the health center (all in Khmer, if you can believe it), and our Community Mapping activity last week. This week were put to the task of organizing something of a “field day” for the high students of the local high school. Exercise is out of the norm in Cambodia. It was explained to us that most individuals would be laughed at for exercising in their community and that exercise is not something that is generally taught or encouraged. That being said, most Cambodians live active lifestyles given the physical nature of their laborious occupations and general housekeeping, but the protective qualities of activity are best achieved by more intense exertion and often with some type of goal in mind. Our aim with the students was to introduce the idea that there were many options (fun ones!) for exercise beyond regimented cardio or weightlifting, that a variety of exercises was important, and that the best activity was the one they most enjoyed doing. This practicum would be unique in that we would be working with local counterparts – a handful of high school kids – to plan the activity. 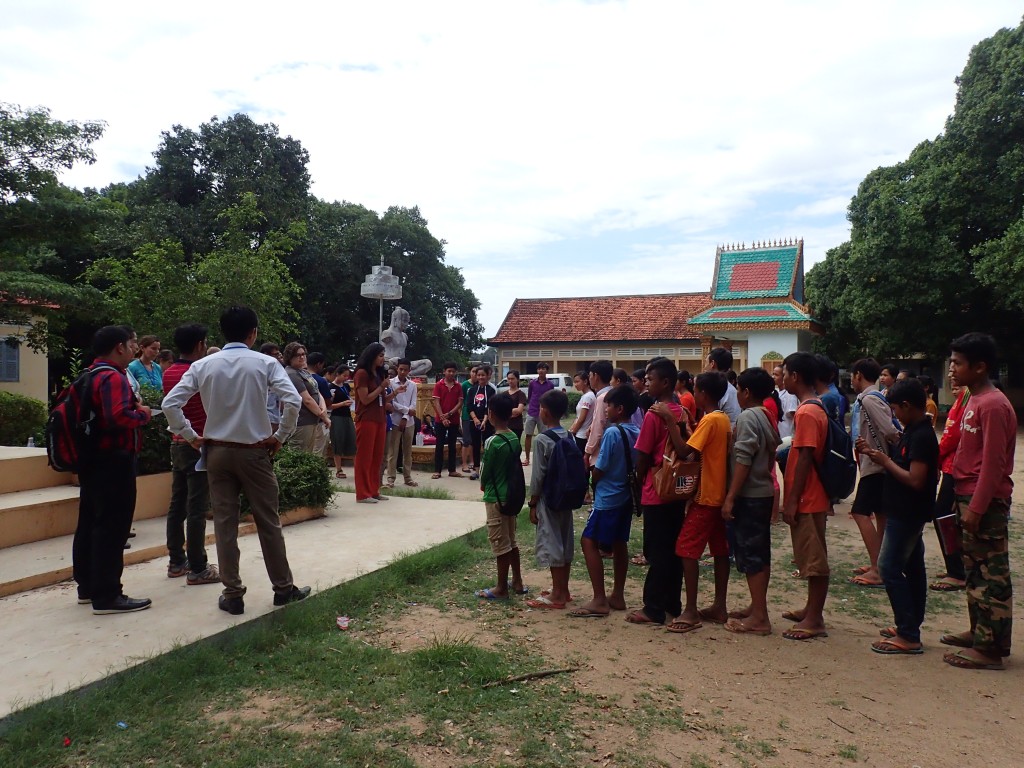 We were split into 4 groups: 3 different exercises and 1 group to provide a health lesson/manage logistics/and run the snack and water station. The latter group had a lot to handle, in retrospect. I happened to be a part of that group. We gathered the throng of kids and rushed through our shpeal due to our anxiety about the disorganized nature of the initial gathering of students. We managed to give the students wrist-ties of four different colors to distinguish their groups but tripped over many of our planned steps in the momentary stress of managing 50+ kids who’s language you do not speak. Our brave counterpart, a high school girl named Ailou, led the field full of her classmates through some warm-up movements, then we happily got the students to their initial stations: volleyball, relay race, yoga, and the snack station. After a shaky opening, things got off to a great start. The groups had about 15 minutes at each activity station before our welcome group would help rotate the students. I had the privilege of roaming throughout the stations and snapping photos, watching my fellow trainees get each group of kids up to speed and invested in the activity. I was proud of our welcome group for orchestrating an impromptu game of musical chairs upon realizing that snacks and our handful of Khmer would only get us so far with these kids. We were all concerned that gender might be a hinderance in planning some of our activities, given that many girls become more shy with age due to social expectations to be so. It was a treat to see most of the girls warm up to the idea of each station and finally GO for it. Spent by the end of the 90 minutes, we asked each station to thank their kids and send them home for lunch. We had not planned a closing ceremony of sorts, reasoning that the kids would be anxious to get home to eat and generally wanting to avoid the chaos of gathering them all a second time. We later wished that we had planned some time of closing gesture, but were all ultimately pleased with the day. After all, wasn’t Field Day the best day of the school year? 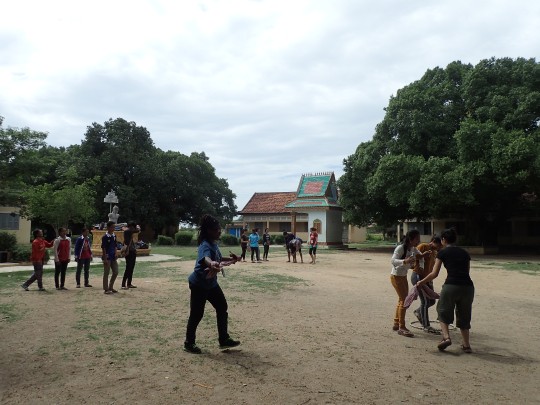 Shanniqua walkin’ the kids through the relay race. 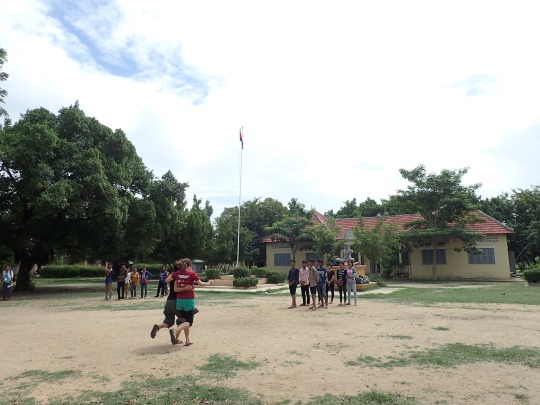 Kathleen and Amanda sacrificing their dignity to demonstrate the race. 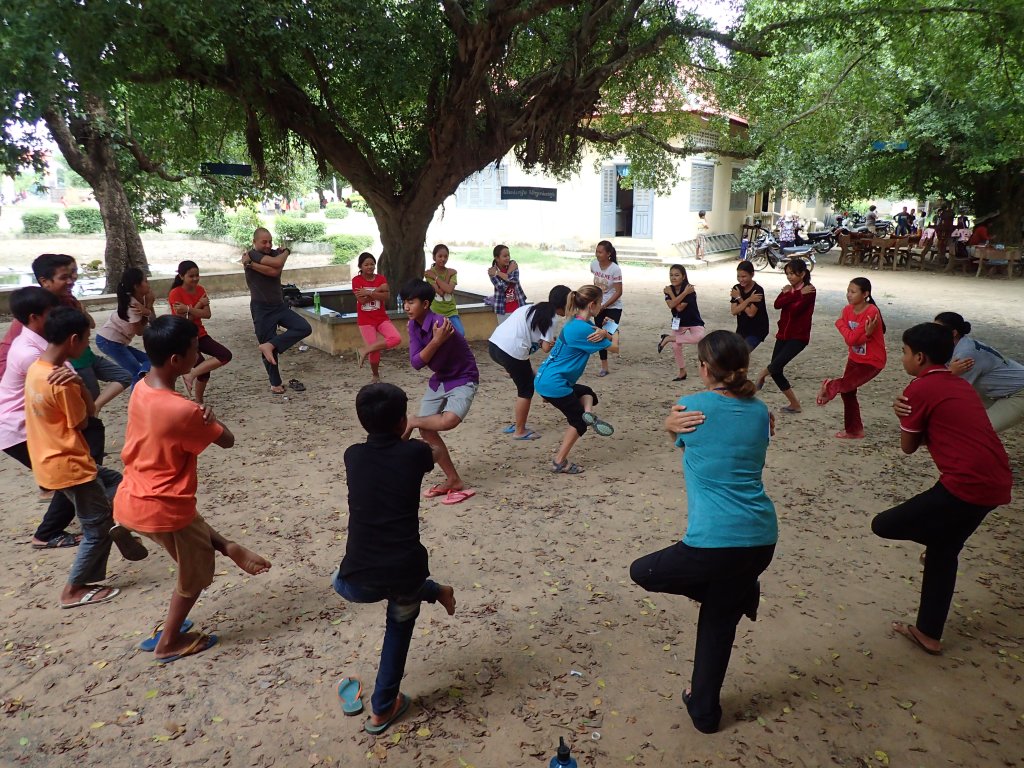 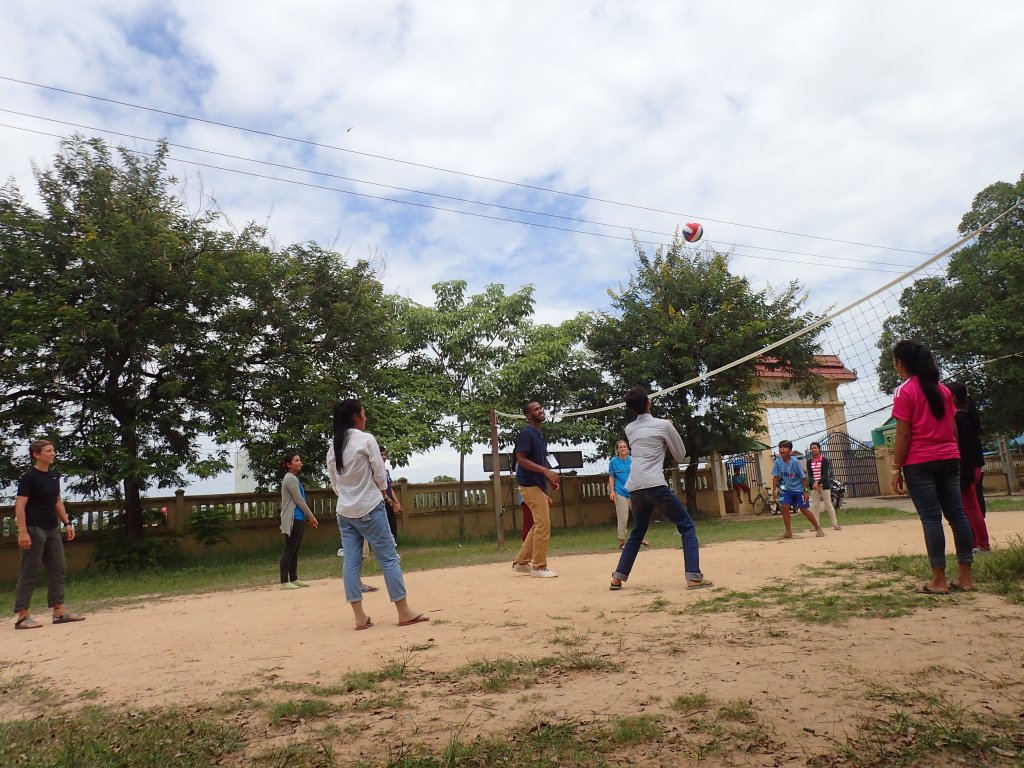 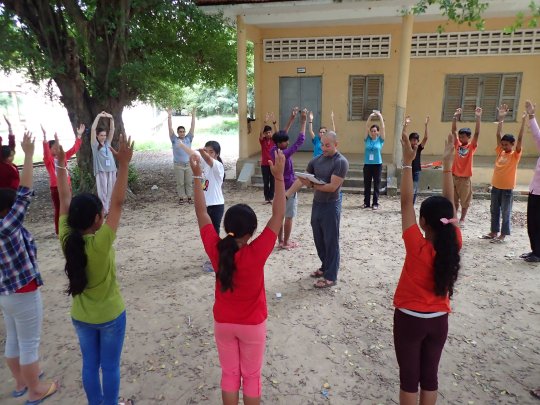 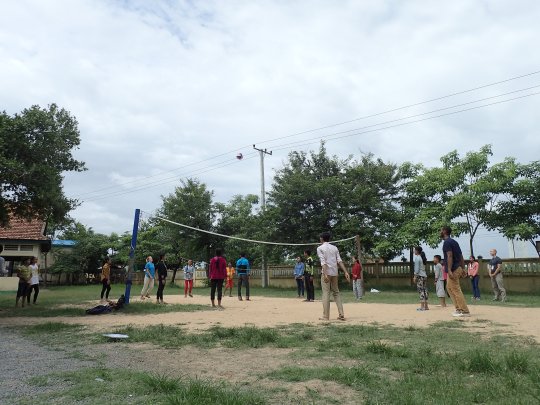 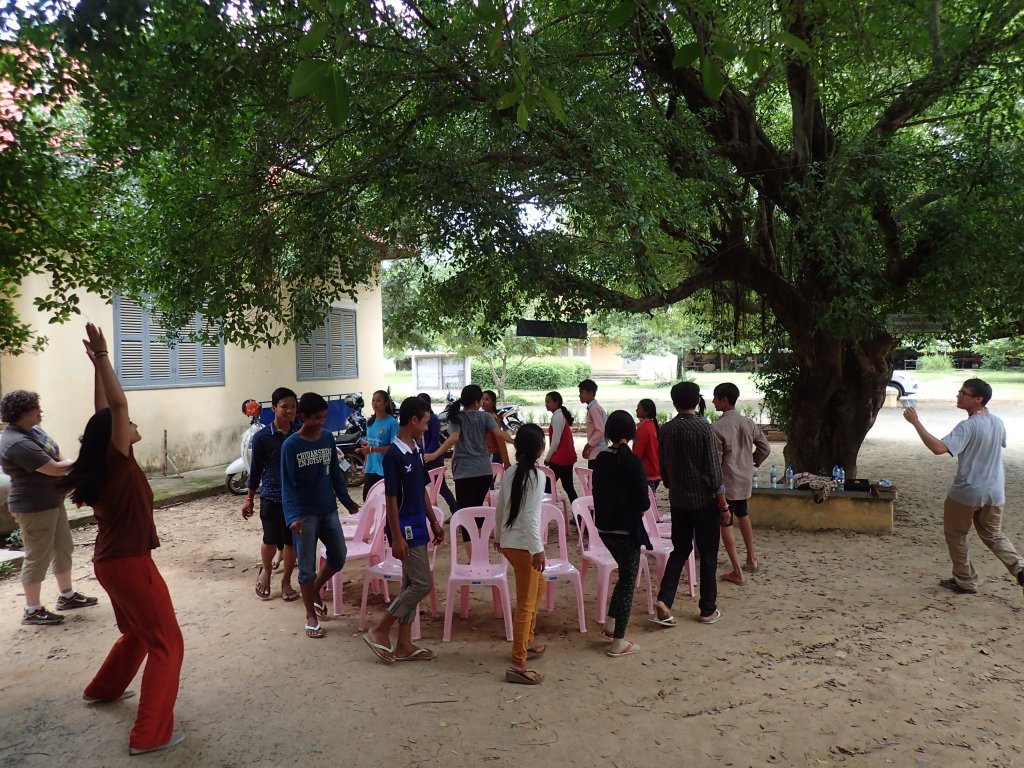 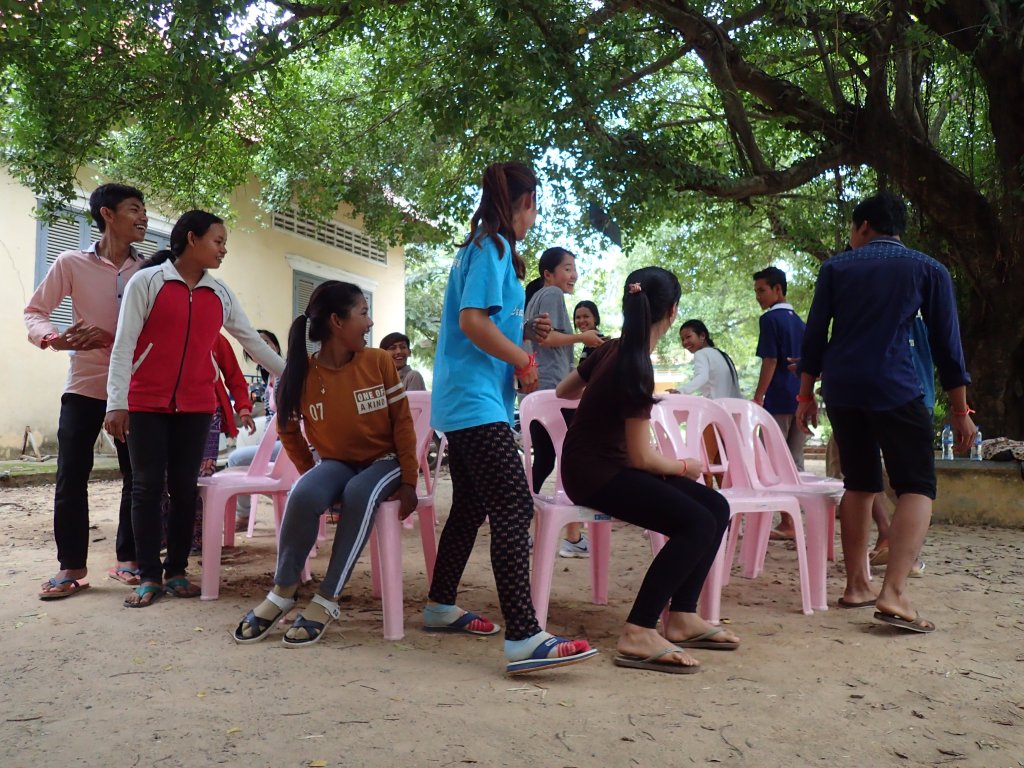 To break up the monotony of language classes, Language Culture Facilitator (LCF) Extraordinaire, Savin, crafts up a half dozen new games every day. For learning directions, we played life-sized Pac Man. Directions were to be given only in Khmer, landmines were to be avoided, and the prized toy ball had to be snatched to end the game. I only killed Morgan once, so I’m calling it good. 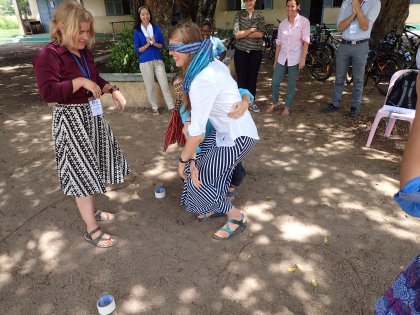 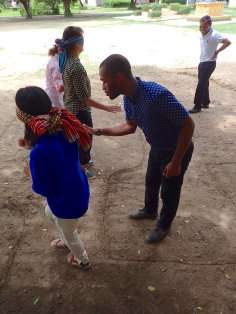 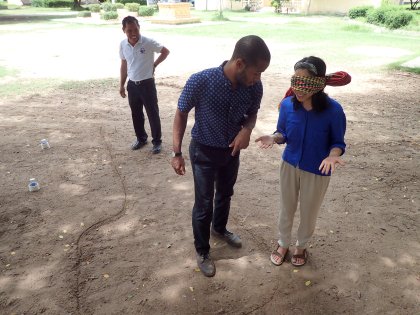 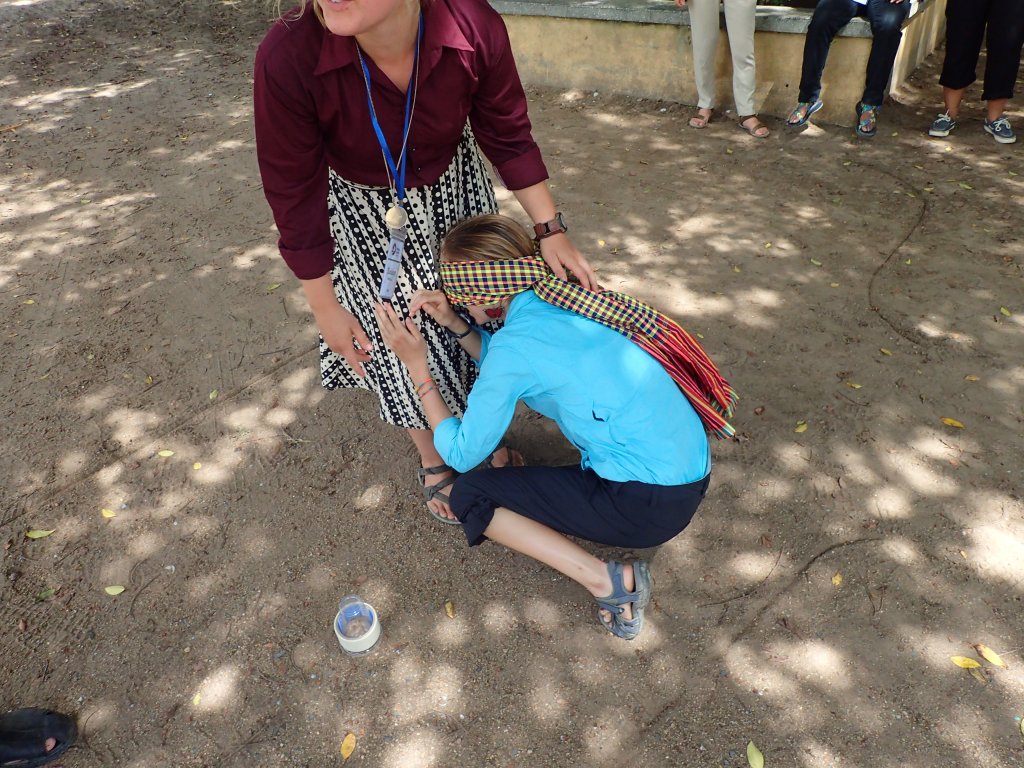 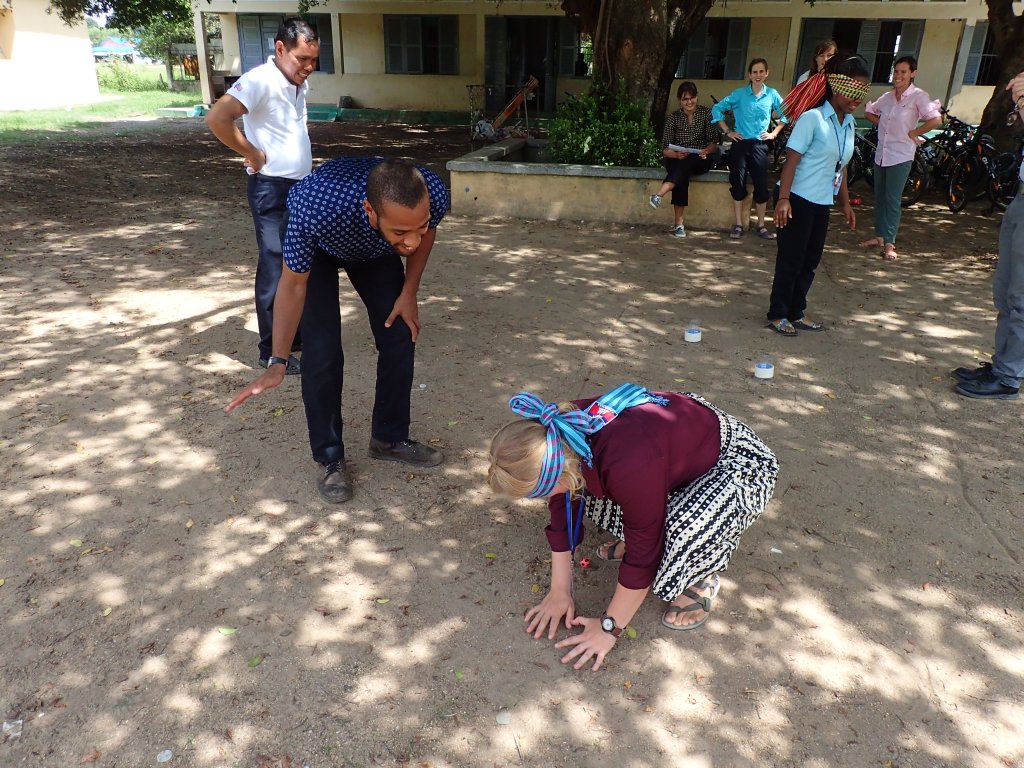 By now you are surely familiar with Savin as I have spoken of him constantly. It is only because he is the greatest Khmer teacher who ever walked this Earth and if he told me it was raining duck eggs outside I wouldn’t even look to verify. That is why it pains me, and I’m sure you, too, to report that this was our last week with Savin as our instructor. The six of us – Shanniqua, Lian, Alli, Amanda, Carlen, and myself – would be split up and assigned new instructors. I understand why Peace Corps does this. Expose us to different teaching styles and accents, yada yada yada, rational reasons… I don’t yet care. I will miss this language group and instructor every single day. You have been my family these past few weeks. I do not look forward to overhearing laughter next door from whoever is so lucky to have Savin as a teacher. Never forget your first K10 family, Savin. SLAACKS for ever. 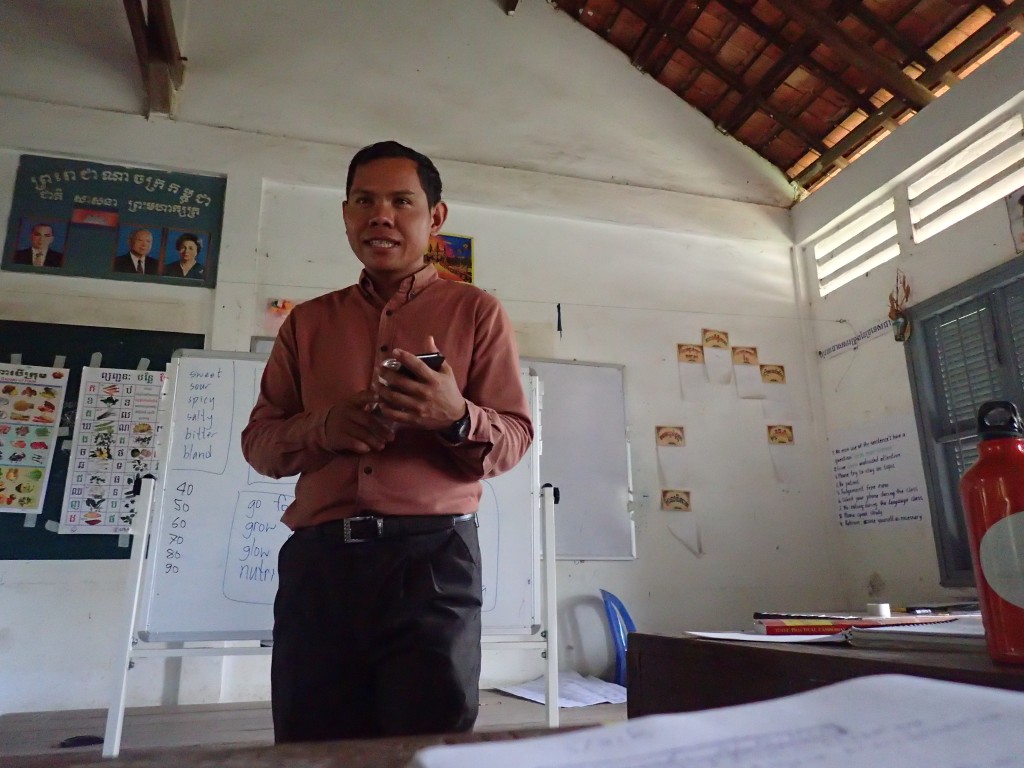 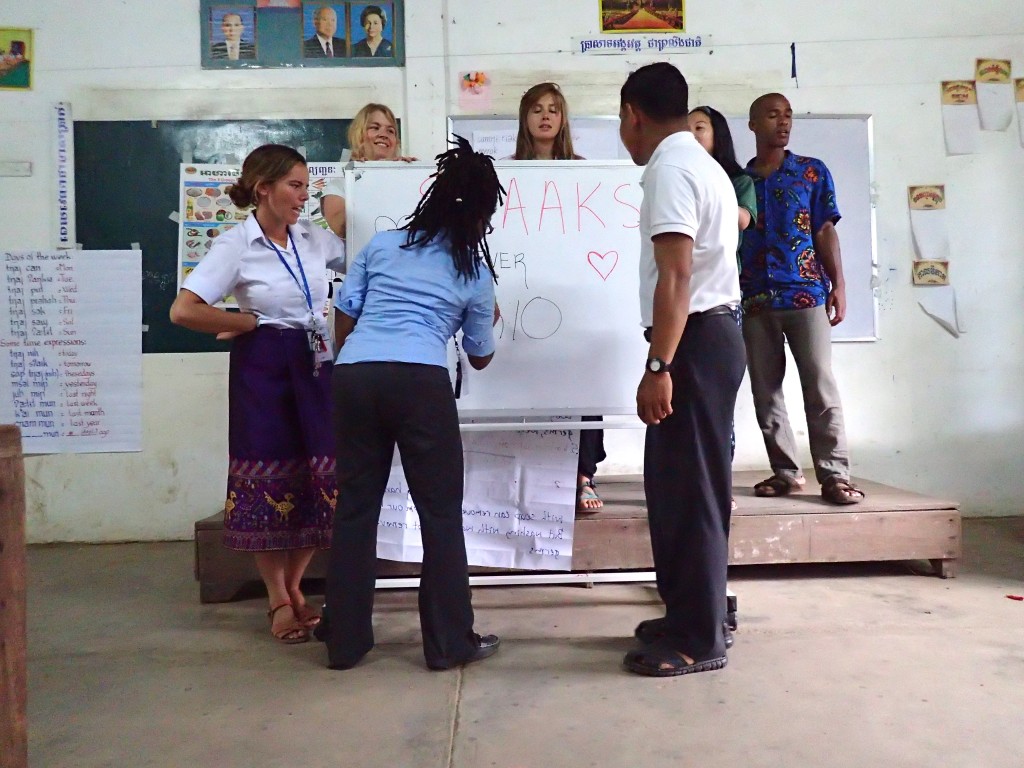 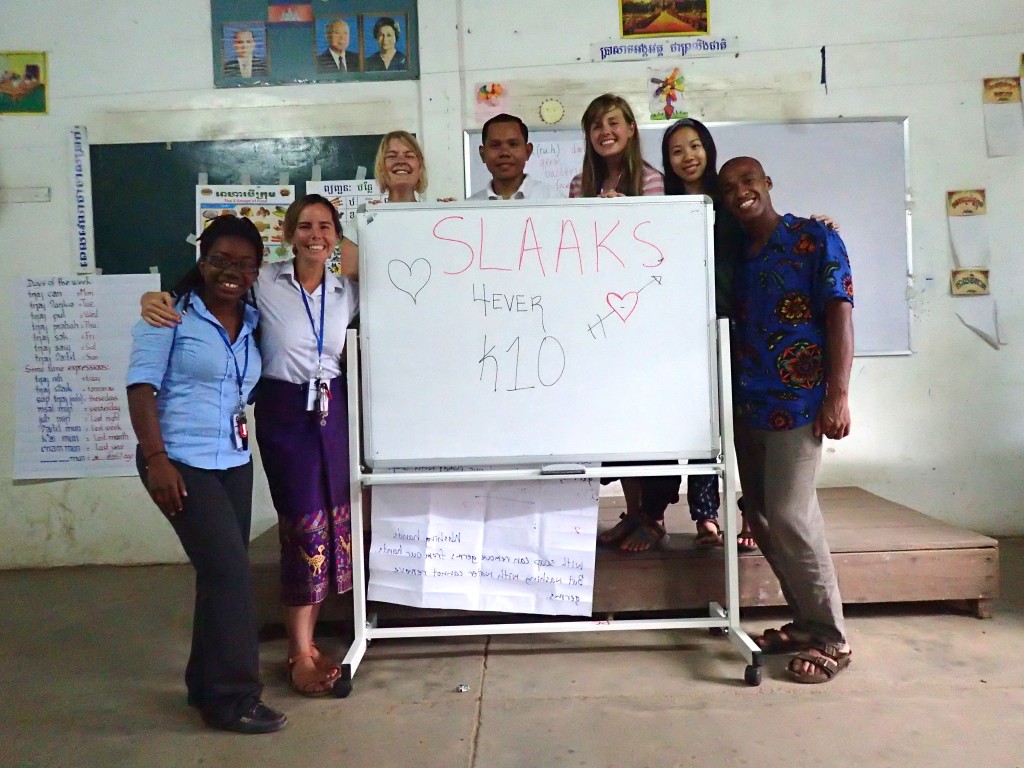 As Peace Corps Trainees, our usual state of being involves being wedged into plastic chairs for language or technical class with the lingering sweetness of some treat on our lips: sour mentos from Cait, Savin’s coffee candies, dragon fruit, or Khmer donuts, to name a few. Finally having free time and with ever the energy to burn, some of us troops rallied after language review on Sunday to go for a longer bike ride through the rice fields adjacent to our village. It was, as suspected, stunning. The green is a pulverizing, pulsing sensation. We took our sweet time and enjoyed some deeper conversation which, as PCT Rajath pointed out, we will long for once we’re at our permanent sites and wanting for English-speakers. Yes, we tried to take a cliche jumping photo. Yes, we tried a dozen times. No we did not get an ideal photo. Yes, I will share all of the outtakes below.

Salient Points of the Week:
1. Lighter skin is prized around these here parts and therefore most young Khmer women try to avoid prolonged sun exposure for fear of deepening their complexion.
2. My host brother – previously thought to be my exact age is actually three months OLDER than I am. Important! He is my bahng (older) proh as opposed to puhon (younger) brother. Ah, the simple comfort of feeling certain about how to address someone.
3. Many rice fields are full of land crabs. I know this because I have seen them with my own eyes. Well. One. I have seen one of them, being toyed with by Maddy’s dog.
4. Jumping photos are impossible. 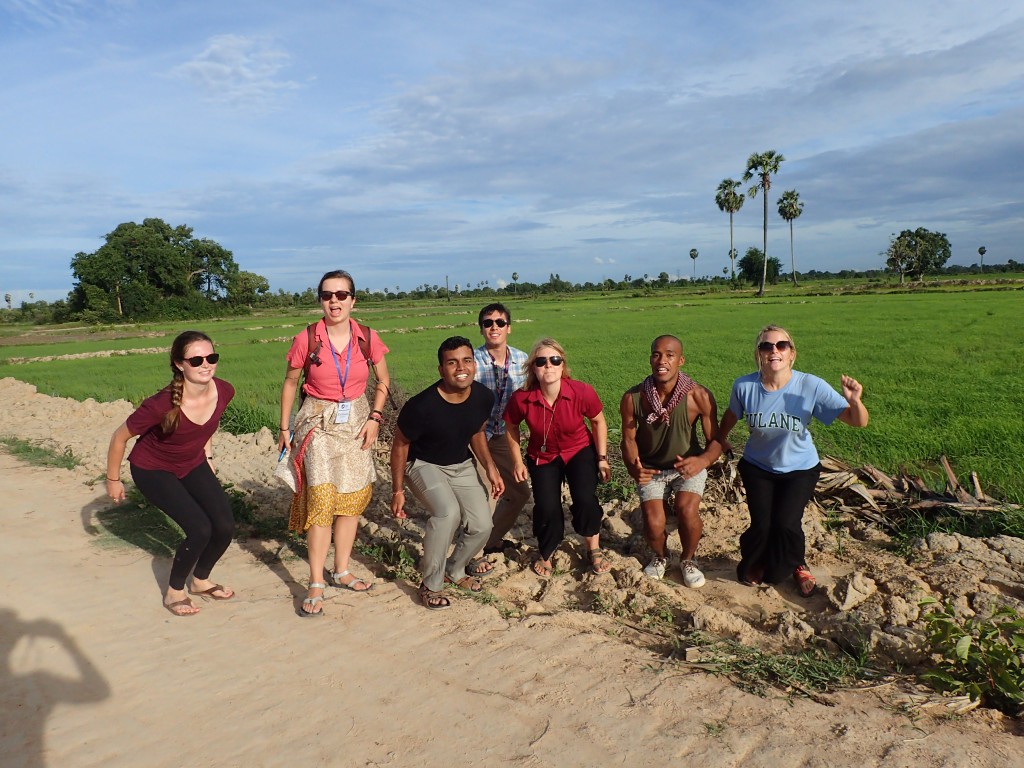 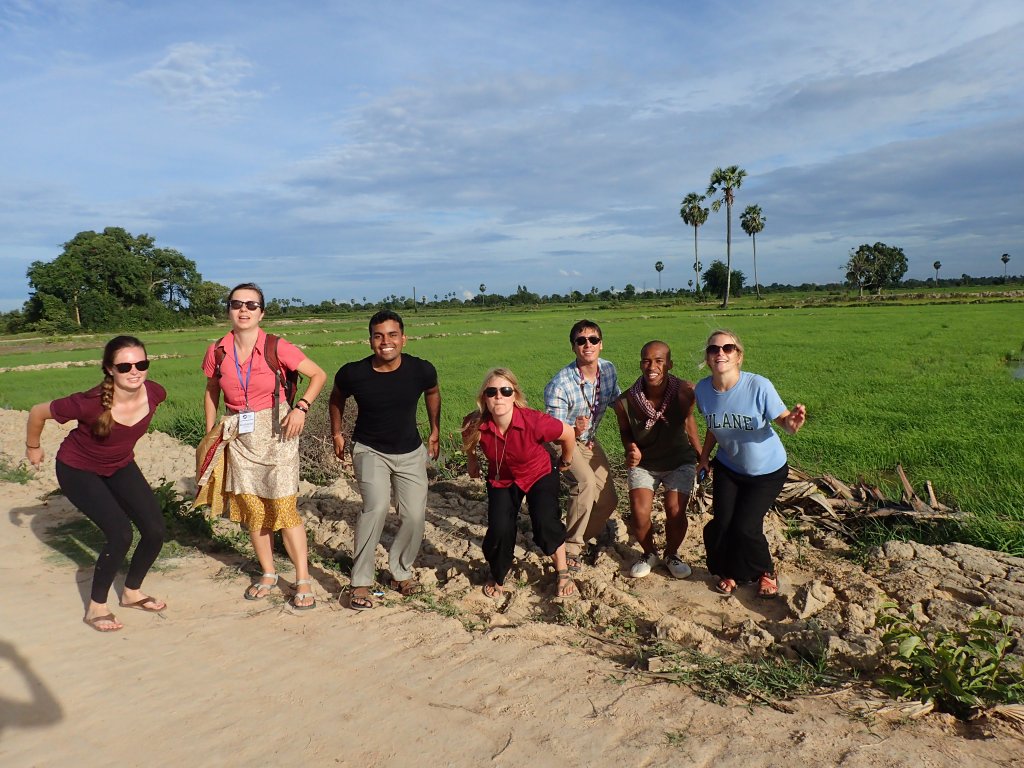 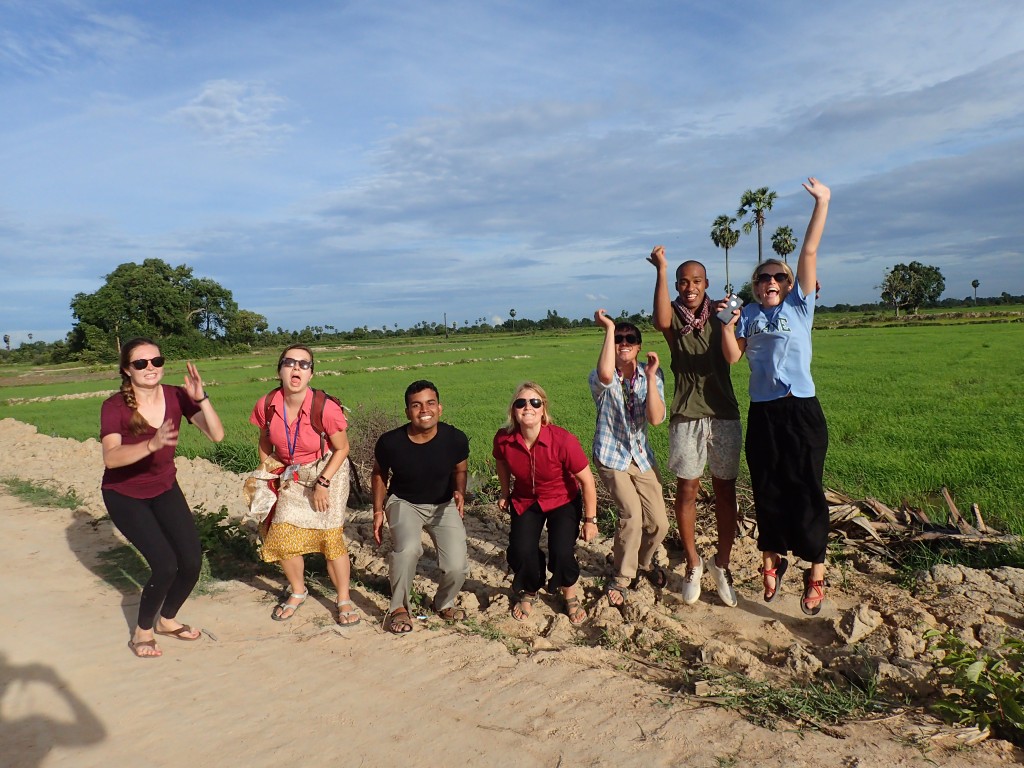 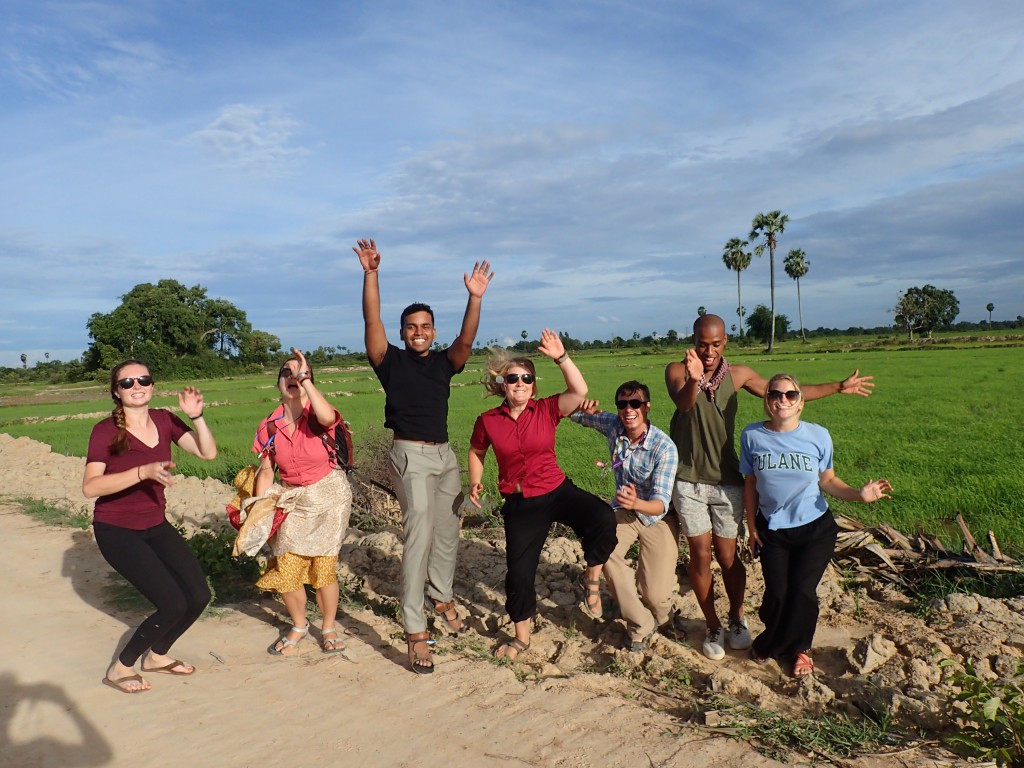