I’m not moving houses and was probably never going to.

While in Takeo Town I had dragged myself to a cousin’s wedding to which I’d long ago promised my family I would attend. Recent events besides, free fancy dinner is free fancy dinner. And, I reasoned, all of my extended family would be there and they’re all wonderful. I donned a long gown and biked to the wedding tent where I was warmly received by aunties, cousins, and uncles. I was on edge but hadn’t yet spotted mak. Yaay sat me down at a table of men I’d never met and we were served course after course. Sieklin appeared and we excitedly caught up. Then he asked, in English so no one else would catch on, “And your life here. Is everything okay?” so I knew that he knew. “Granny told you, huh?” and he timidly confirmed. But I didn’t mind. “It will be hard to move, but I understand. You will still be my cousin and my friend.” I excused myself as guests started to arrive and the sun began to set. “It’s getting dark, I have to bike back! Peace Corps rules!” I shrugged and everyone squeezed my arm and understood, thanked me for coming, and helped me grab my things.

I had almost made it out of the tent when mak appeared, smiling with her arms open. “Come, get your hair and make-up done, mak’s treating you!” and she led me back toward the groom’s home. “Did you eat enough? Is your guesthouse far? Do you need anything?” she asked, some of the first direct questions she’d asked me in months. She sat me with the stylist and I knew then that she must also know. How dare she even try with me now, after all this time. I grew hot and furious under all the powder and hairspray. The second I was styled, I said my goodbyes again, firm this time, and disappeared on my bike.

The next morning I biked straight to the health center from Takeo and happily dismounted, parked my bike and bags out back. It was the day, the day we would meet with my host-dad and get things rolling. But it was not to be.

The meeting never came to fruition. The chief avoided me most of the morning, told me once or twice in passing that he only needed to get this one other thing done and then he’d call my host-dad. I waited. At the shift’s end I discovered he and Vuth trying desperately to rescue the chief’s keys with a long bamboo pole inserted into the window of his office where he’d accidentally locked his keys. “Oh, whoops, we never had our meeting! Okay, go have lunch at Vuth’s first, then we’ll all meet,” the chief assured me. “Come,” said Vuth.

Once at his house, Vuth and I sat for rice and he laid the cards on the table. “The chief went ahead and met with your host-dad over the weekend. They’re good friends.” I knew there was more and what the conclusion would be and I cried quietly in my rice. He continued. “Your dad said he had had no idea how hard things were for you at the house. And I know you love him but he definitely knew. He never thought you would leave, though. And now I know he fears for his family’s reputation.” Vuth wasn’t looking at me and I could hardly look at him for how hard I could tell he was concentrating on what he was saying. “If you think you can stay there for the next few months then maybe… maybe it’s better. You’re strong.” His wife appeared and could tell we’d talked. “You can do it! Endure!” She offered to let me rest there for a while but I said I should probably go back to the house.

Around noon I finally made my way home for the first time in days but managed to avoid my family as I went upstairs. It was always going to be far too much to ask to switch families but stay in the same village, I told myself in the shade on the balcony, crouched on the cool tile. I spent the afternoon emotionally moving back in to my room, to the whole upstairs. I felt as if I’d driven from Maine down to the tip of Florida in one shot, that my car had broken down and now I was walking back north.

In some hours, I acknowledged my hunger but abided until I thought everyone was napping downstairs, then made my descent. I miscalculated and instantly saw pa sitting at the table. When he saw me he jumped. “Hey! Eat, uhh, round bread? You know, round bread? Do you want some? Hey, mak!” Mak then exclaimed from the kitchen and waved me over. “Here, here!” she called. She handed me a bowl of rolls (round bread) and curried freshwater prawns which I recognized as a dish from last night’s wedding. “I asked the uncles you sat with what you had eaten the most of and I brought you some extra,” she smiled as she led me over to the table where I ate mechanically in a daze. It occurred to me how bizarre this rather un-bizarre episode felt.

Mak laid on the sugar extra heavy over the next few days, which is to say, she acknowledged my existence. She even referred to me as “daughter” once instead of “her” and kept offering me the snacks she usually reserved for her real kids. I did my best just to accept it at face-value. Maybe a corner really had been turned, maybe she really had grasped the reality that I would eventually leave and she might miss me. I dared to do several things around the house which I had previously thought incomprehensible: use the washing machine, occupy the kitchen for more than twenty minutes, stick my shoes in the new shoe-rack mak had set up for the family. On the second day of mak’s deluge of sweetness, I watched her count the family’s cash. In her hands flashed a hundred dollar-bill which I knew had been a part of last month’s rent. I calculated the hundreds of dollars the family would have lost if I had moved out for my final months. She noticed me nearby and pulled her mouth into a smile that told me the same arithmetic had crossed her mind more than once.

By the morning of the third day I walked downstairs to find my shoes tossed out on to the pavement beside the shoe rack and I knew we were back to normal.  I felt a dull ache which at that point I knew well and thought I might talk to Leakhana about everything when she came for tutoring. She pulled up and smiled as she scooted on to the bench beside me. “What’s up?” she asked as she shook out her long black tresses. “Can I braid your hair?” I asked, and she flipped her hair over her shoulder for me. 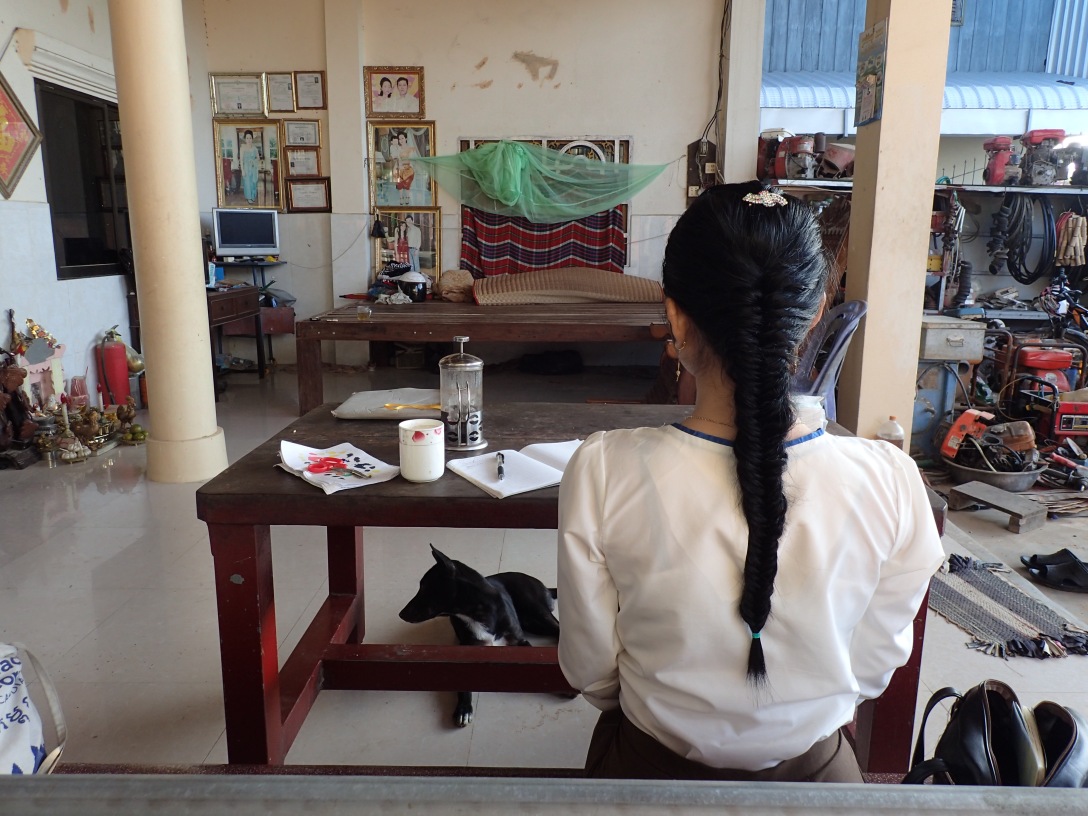