Reading: Love in the Time of Cholera by Gabriel Garcia Marquez

The café owner gave me the damn puppy. The thing had been running around by my feet all week as he cracked what I thought were jokes about my pa thinking I needed to take care of and love something. Then Veth, the café owner, handed me the dog with my change after coffee one morning. And so it was. I walked back toward the house with the terrified dog in my arms until an aunty waved me over and gave me some thick twine. I tied him up to our tractor and he fled to hide behind it’s wheel. At work I flopped around in self-pity about my head-cold, something against which I had previously thought to be safeguarded by living in the tropics. Srey Muel, the pharmacist, practiced some Khmer with me, mostly some vocabulary and example educations about hand-washing with soap. We walked home together. “Ah, something for you to love! Now you won’t miss home so much!” said aunty Thuu from her shop front.

At the house I checked on the pup but he was still too terrified of me to do much other than growl from behind the tractor wheel. I did the most laundry of my life and gave the poor animal a bath and de-ticking with tweezers. When I tried to feed him some hotdog bits and snapped at me, I brief thought of Peace Corps’ strong recommendation against petting, let alone owning, Khmer animals, flitted by. I went for a long bike ride to sweat out some tension and Baoh surprised me on the rode. We rode some distance together and through chatting realized we were both supposed to help serve guests at the funeral later. I had heard the traditional music blaring from a loud-speaker and had seen the white tent fluttering in front of the deceased house but hadn’t known much about it, just that I’d been instructed by mak to arrive there at five in nice clothes. After a quick and fitful nap, I put on a nice traditional skirt and my tailored shirt with the bow in the front, then walked over.

Yin, the nice young guy who sells rice porridge and shrimp cakes sometimes, received me at the entrance and made a fun show of my arrival, as if I were the most distinguished guest. Behind the house there was a small tent set up with a large shrine near its end which consisted of a house made from bamboo and flowers, decorated with pictures of the deceased relative I couldn’t have recognized. In the tent were something like 40 grandmothers and grandfathers (very, very old Cambodians) in their nicest white shirts and black pants/skirts, hands pressed together as a monk delivered a speech near the shrine. Yin sat me up front, near the shrine, and some of the grannies smiled and whacked my folded legs in greeting. The monk led a procession of primary school students – presumably grandkids of the deceased – thrice around the alter as they scattered flower petals and whipped holy water upon us. A team of men in matching red polos, the hired help for the evening, were setting up tables around the outside of the tent as we prayed. I rose to grab some water when a thin, bright-eyed elderly woman approached me. She was a doctor in Phnom Penh, a Pol Pot survivor with no siblings or children and she was truly incredible. We laughed about the Cambodian obsession with pills and how encouraging people to exercise and eat right was impossible. She explained that this was a 100-day funeral for a woman in the village, a distant relative of hers, who had passed away about 100 days ago. She wished me well and went to find her car back to the city.

That night I helped prepare the plates of condiments for the rice porridge, the black pepper, bean sprouts, chili paste, etc. The guests – friends and family from the village, also some from out of town – began to pour in and show their respects with a little monetary donation which they then milked for as many bowls of rice porridge as they could stomach. I was too nervous to stray far from my little prep area as I feared I might be asked to help pour the large pans of scorching porridge over the shoulders of guests. It felt like catering in college and I was ecstatic to have a little job that I could do very well for a few hours. The nice young guy who lives with and works for my family, Young Uncle Vii, came to eat and help as well and we exchanged smiles and a weak wave. I could hear him being teased about me by group of his guy friends and he laughed but was too shy to talk to me the rest of the night. Once dark and the flow of guests lessened, the young aunty who sells duck egg muffins and hotdogs across from my house came and grabbed my wrist to have me sit and eat porridge with her. “Come! It’s time”, she said. We’d been on our feet serving guests for some time and if we didn’t eat now we would surely die. She and I inhaled several bowls of the porridge, made savory by dried shrimp and silky from the fresh rice, until we both reclined in silence from the surfeit. Too dark to make the 100-meter walk home on my own, Baoh arrived and tapped my shoulder. He moto’d behind me for the entire 4 minute-walk, lighting the way with his headlight. 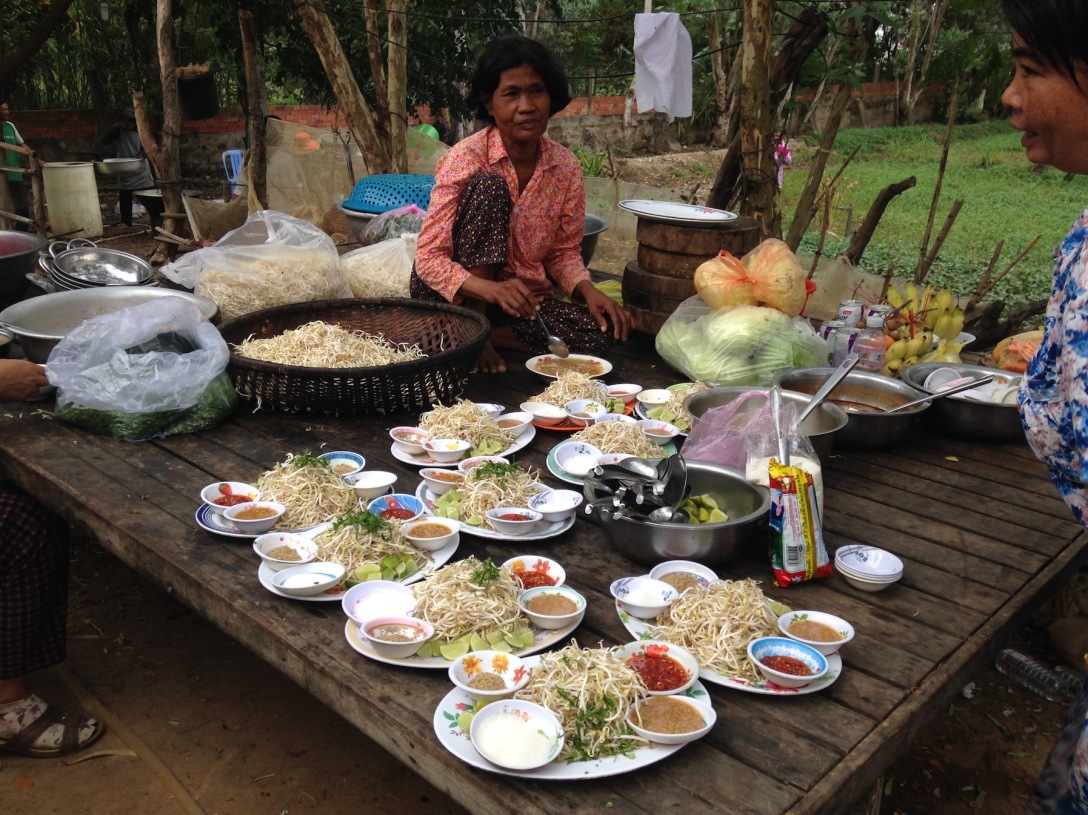 Update: By the next morning the puppy had bitten me clean on the hand which meant I had to rush to Phnom Penh for a rabies vaccine. The medical officer insisted I stay in the city to enjoy New Years and I did, though I hadn’t planned on it.