Do you remember the state fair as a child? Carousels, polyurethane menageries of balloons, performance art, tinny music, a dozen delicious treats frying all at once, inflatable castles, cheap trinkets and prizes which – on that night – gleamed like crown jewels. The memory may come as either a sensory delight or nightmare. Before arriving in Cambodia, I would have considered the described carnival experience to be something entirely alien in a developing nation. Where would one even rent a bouncy castle? Or find vast quantities of frying oil for cakes? Then along came Kathen Festival, parading in many of the same colors and sentiments as an old fashioned state fair but here dripping with luscious, ancient tradition.

Called Bon Kathen (“kat-tehn”), this Buddhist hootenanny has been jazzing up village life for centuries.  When I asked my pak how old the custom stretches back, he couldn’t put a number to it but finally said, “Much older than America, I think,” and we laughed as we often do when he pokes fun at my baby country. Kathen is thought to have originated directly from Buddha himself who acknowledged that the sacred, lovely robes of the devout monks would be much soiled after long pilgrimages during the rainy season. Thus, the fun kicks off with a parade through town wherein villagers – many of them elders in their freshest traditional Khmer clothing – proceed down the main drag in town toting opulent golden urns full new robes and other offerings for the monks. The procession is led by a “chai-yam” band playing traditional Khmer music and several avid, masked dancers. I watched roadside with my neighbor niece as the crowd rolled through town on their way to their final destination – the village pagoda.

Within a period of about one month – from the middle of the 11th to the 12th months of the Khmer lunar calendar – each pagoda within a community celebrates its individual Kathen over the course of two nights and one day. As the festival is being prepared at the pagoda, loudspeakers encourage visitors to join and donate to the community fund for local repairs and upkeep of the pagoda, schools, health center, you name it. It was a delight, per usual, to hang with some of my friends (i.e. respected elders) from the commune office as they managed donations and made announcements at the center of the commotion. 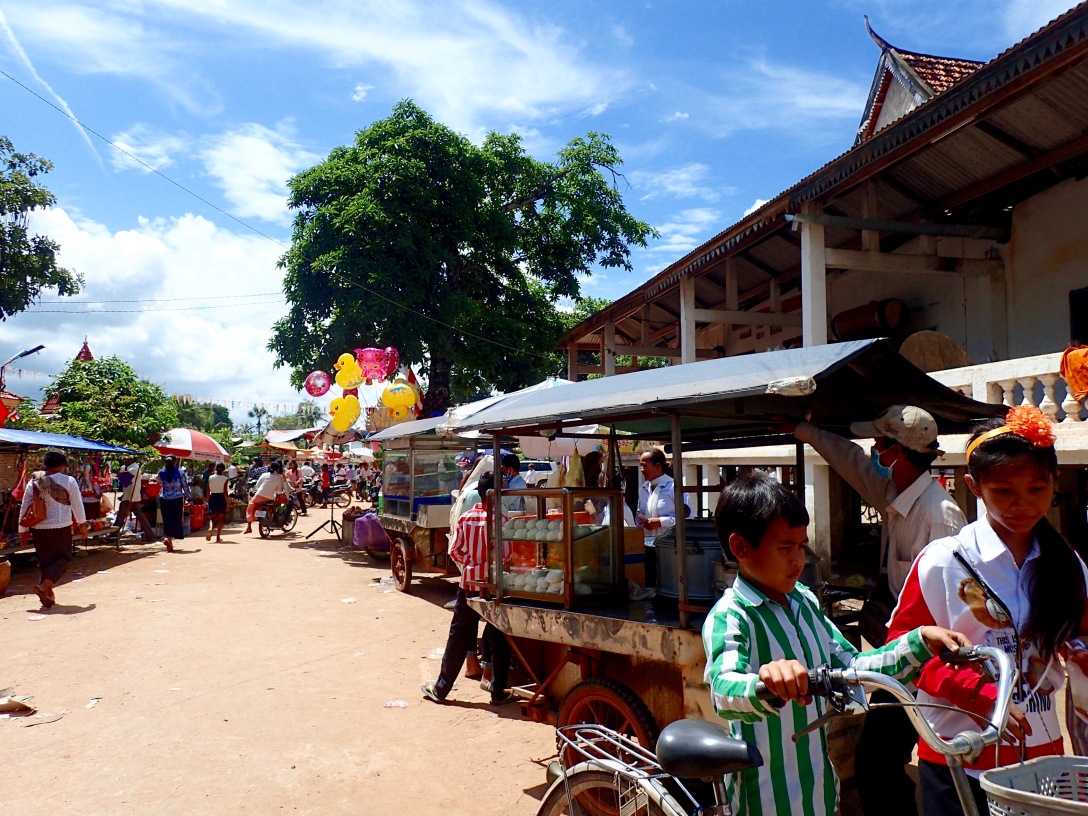 In waves, the cities are drained of their professionals young and old as everyone returns to their home village for the festival. And what do they do when they come home but, of course, cook and eat. For Kathen we eat “numbanchok” which translates literally as the cake that feeds. These are Cambodian rice noodles which are served all year round, but now they are dressed in dreamy curry sauce with duck meat and a mélange of local veggies – slivers of banana blossom, long green beans, biabing (cucumber-like, but appearing as if from deep space), and mysterious herbs.

I have learned that if I set my mind to it and sit near my mak long enough while she cooks, sometimes holding my breath during the peak of my vulnerability and anticipation, she will eventually give new meaning to my life by way of menial tasks like peeling onions and smashing garlic. Such was my game-plan for this feast. I observed mak do the heavy lifting: massaging freshly shredded coconut into water to make coconut milk, draining the blood from an enormous duck and painstakingly removing the feathers, then gutting the beast with a few flicks of her toned arms. I prepared the veggies and mashed the curry ingredients, all fresh and bursting with life. Paprika pepper, garlic, ginger, shallots, lemongrass. A few generations back, likely during Cambodian period of French rule, it became a traditional to serve baguettes along with the curried noodles. I was resistant of this imperialist gluten intruder. Until I ate it. Now I dream of it.

Although each pagoda – of which there is one per village – hosts only one Kathen per year, village participants can attend as many as they like. There was particular rejoice about this tenet within my community for, this year, our pagoda and the pagoda of our neighboring village would be hosting our festivals back to back. That’s right, basically a nonstop party. This afforded me the chance to divvy up my time between my family and my friends who live in the next village over. I was so touched by the many invitations extended to me by coworkers and patients from the health center that I could hardly pass them up. I fasted appropriately and saved my stomach for what would be a day of marathon eating. I biked from home to home all afternoon and helped prep different variations of the same curried noodles, eat family adding a hint of their own magic. At least one house required a sojourn through soaked rice paddies to reach the family’s favorite eating spot. My tutor and closest friend, Leakhana, taught me how to dice cucumbers in half the time (although with twice the risk of finger loss) and my coworker Nhim Luhn schooled me on the most discreet way to spit out your duck bones for the dogs. And both of them taught me their personal methods of mollifying their tiny sons while expertly wielding giant knives and boiling cookware… a customary contact sport for Khmer women.

The final night of the festival in my village gave me genuine ants in my traditional Khmer pants [read: skirt]. When night had fallen, I waited downstairs while my sister got ready as party music from the pagoda down the street bounced in between my ears. Just as we were about to head to the party, mak couldn’t stand to be left out the fun. She had spent much of festival’s duration seemingly frustrated with the overall frivolousness and meager patronage paid to her dried fish stand. And then all of a sudden, there she was, dragging me to the pagoda by my hand and leading me from stall to stall, pointing out which toys were the most fun and which cakes were the most delicious. As we made our way, I buzzed with happiness from chance meetings with friends, aunties, uncles, and students calling me by name or just as, “teacher!”. Buoyed along, I thought of the way our PC Medical Officer once described to me her sense of the love and community in Cambodia, “It’s like water,” she said. “You don’t recognize it in every moment, but it is the thing holding you up, giving you life.”

Grampa, I have no doubt you would have been out there that night shooting darts and chowing down on palm sugar cakes with the best of them. If nothing else, we could have reveled in being the content foreigners eye-balling the ruckus from the pagoda steps. I think you would have enjoyed the curried noodles, too. More sweet and mellow than spicy. Maybe not in the quantities I was required to eat them this weekend. In that regard I barely made it out alive. My best attempt to illustrate my typical gastric disposition around the holidays here is this: Do you know that feeling you have when you are so full of rice noodles that you are going to die…

…and then you eat a baguette?